FabHub and I went to Mom's in Georgia this weekend. She had a dishwasher that needed to be installed - ok, first the Pergo floor had to be pulled up - ok wait, first the old dishwasher had to come out. The guy who came to install the new one couldn't make the changes needed to get the old one out, so he gave Mom some suggestions about how to remove it and said he would be back to install the new one. That was followed with a phone call to FabHub - bring major appliance removal tools.
So, first it was determined that the installer guy was right, the Pergo floor was in the way of removing the dishwasher and that he was wrong, the idea about lifting the counter top was not going to work. First the racks were removed. Then lots of dishwasher wires were cut and the door was removed. Then the motor was removed. Then the saw was used to cut the brace that supported the dishwasher base. Then the base was folded in and the old dishwasher removed from the hole.
Then the new dishwasher didn't fit in the hole. The floor was "that much" too high. So, the quarter round was removed and then the floor was removed. The new one went in fine then. FabHub got it all hooked up. We ran a rinse cycle to make sure nothing was leaking and then he put the floor back in.
Then when the toe kick part of the dishwasher (under the door) wouldn't fit because the flooring was "that much" too far under the unit, the floor came back out. The board got trimmed. Everything got put back together and all is good.
Throw in a filter change on the furnace, oil change on the mowers, and another adjustment or two around the house and you have a productive weekend for the FabHub.
Add in some flea marketing, driving around in new neighborhoods finding odd creations such as this 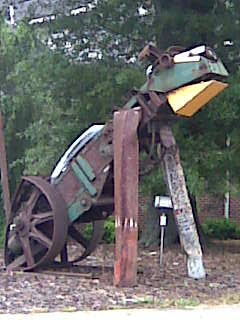 and some outlet shopping into the mix and the whole trip was an adventure.

Then we went outside to look at Mom's garden. 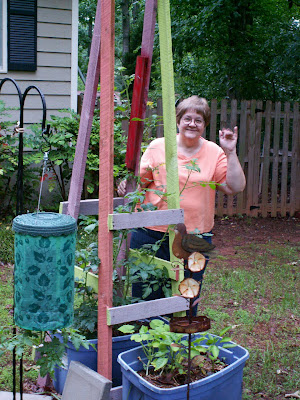 She has grape and cherry tomatoes growing out of the blue tub under the ladder. Zucchini and peppers in the other tub. More tomatoes in the Topsy Turvy. 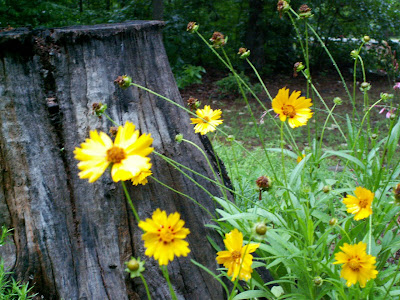 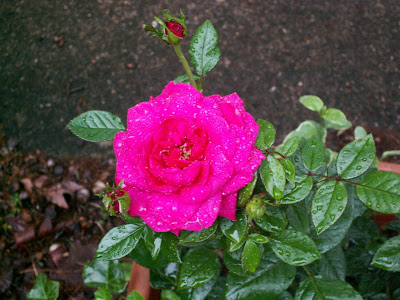 A miniature rose that has gone on to greater things.
But what she really brought me out to see was the mushrooms. They are growing all over the yard. 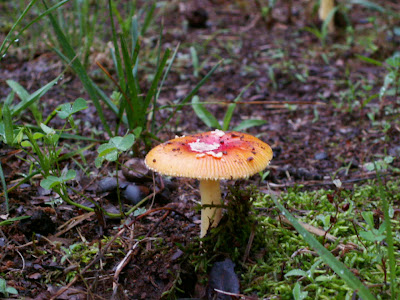 There are flat ones and... 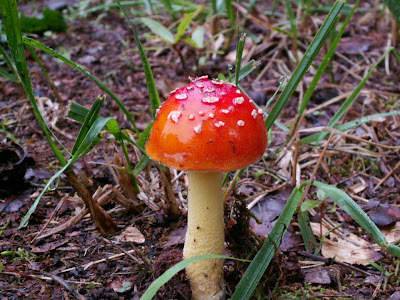 round ones.
I don't know what they are really called. I am sure each type has it's own name in some scientific circle. 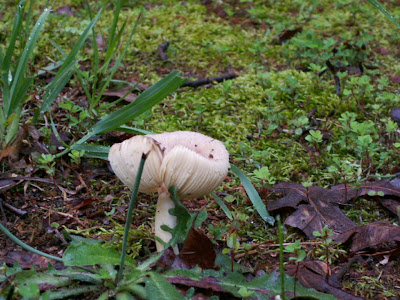 That being said, I call this one Marilyn. Since her skirt is flying up and all. 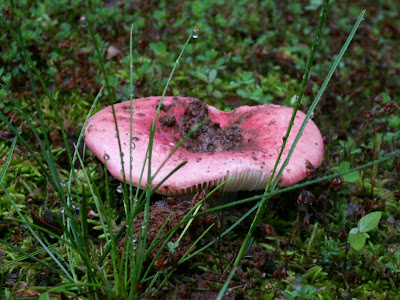 This one seems to be of martian origin due to its reddish color. 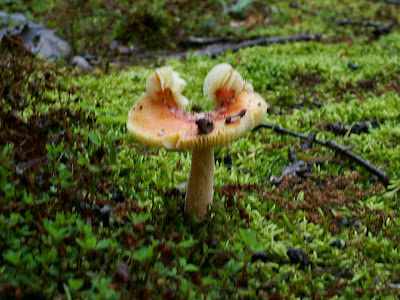 This one has a splitting headache - like you probably do now from all this intense discussion. Thanks for sticking it out.
Posted by Unknown at 5/25/2009 06:56:00 PM 1 comment: Links to this post

New Toy for the Big Boys

The guys have been using our Honda Rubicon to do most of the light weight farm work around here. Light weight is in comparison to the work the tractors can do anyway. 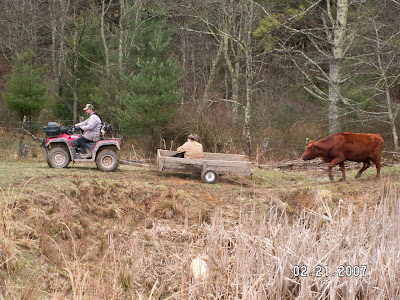 This picture is not much of a load for it. That trailer could have had two round bales of hay on it and both of the men - and the dog - would be riding the 4 wheeler.
That pressure finally killed the transmission. And fixing it was going to cost almost $5000. I looked up the parts that the mechanic said we needed and they added up to about $1500. So someone was going to be earning over $3000 to take the Honda apart and put it together with the new parts. And then we would have a machine that really tried to do the work, but in reality was a bit over matched. SO... they went looking for a replacement.
And look at what they found. A John Deere XUV 620i. Imagine that. 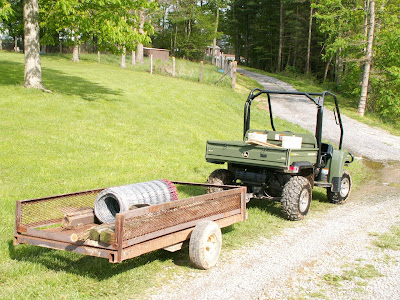 Within 30 minutes of being off the delivery truck it was already working. But that is why they needed it, there is real work to be done around here. Number 3 nephew said it is a Cadillac ride compared to the similar machine from another manufacture that his brother bought. I tend to agree. Very stable, smooth and comfy ride.
The goats said they approve, now they want someone to load some big stumps up on that thing and haul them over to their yard to give them something to climb on. Please! 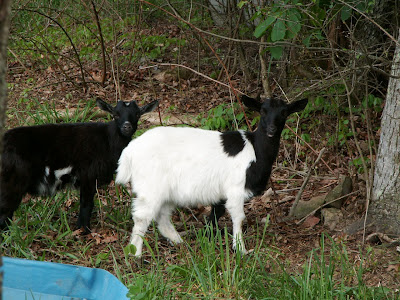 I discovered the German Deli a few months ago and now life has new challenges. I ordered a whole pile of Bratwurst, some Rye bread, some Sour Dough Farmer's bread, some Alpine sausage, and some Waffle cookies. I still have some of the cookies, but everything else disappeared quickly. 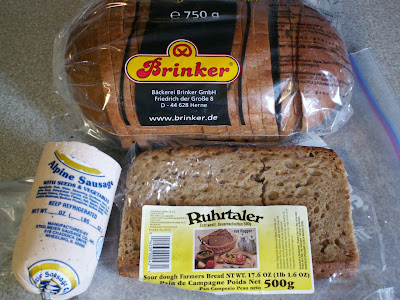 It all came in the day after my friend from Germany was here. She brought me some Wiener Schnitzel mix. The deli carries the mix, but never had any when I was looking for it, now that I have some - yep! They have it in stock.
We stopped in Blacksburg at the Vintage Cellar a few weeks ago and picked up some tasty German beer. Then since we had all that Bratwurst to eat we invited some people over for a cookout. It was a rainy day and people had things to do, but a few of us got together and had a nice afternoon.
Now I have to try avoiding the sales emails from the Deli. Until the next party plan anyway.