Spring is back. I have better proof this time. Daffodils and white tulips are blooming in the windmill lot, but the other tulips are either way behind this year or the moles found them.
My Dutch boy and girl are in need of a touch up paint and the girl seems to have settled, but it makes it cute that he is kissing her forehead. 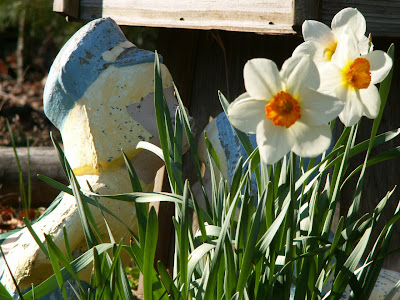 Middle of a white tulip. 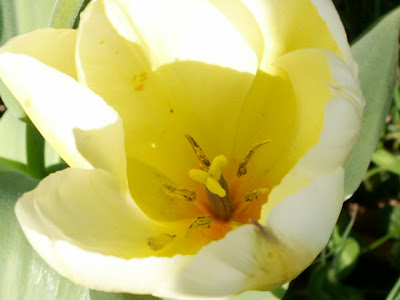 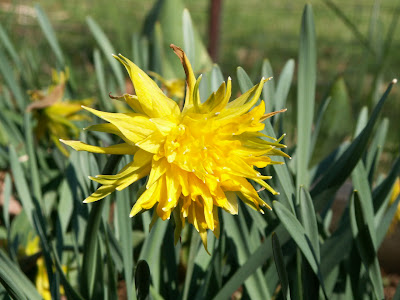 Nice mixed group in the triangle flower lot. This bed will be over run with Aisatic Lilies very shortly. I had to be careful of them when I was pulling weeds. 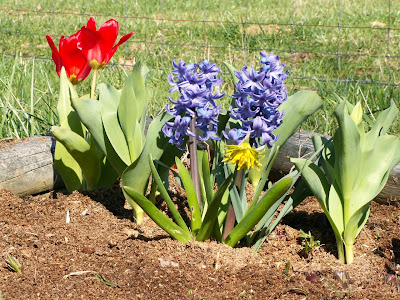 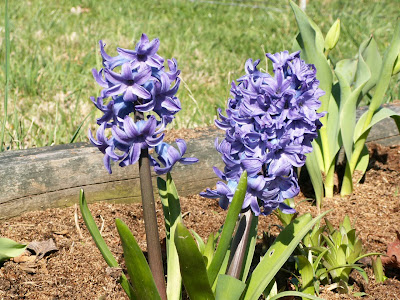 Several years ago I planted some daffodils, tulips, and other flowers in a bare grass spot created by a car that notsoFabHub left in the lawn a long time ago. I built a frame around the bare spot and filled it with dirt. When the dirt finally rotted out the boards I got rid of the flower bed and moved some the plants to other places. The bulbs didn't all get moved though. So every year I have daffodils and an occasional tulip pop up in the grass. This big frog keeps an eye on them. Later in the year he will be surrounded by daylillies and some other random flowers that show up. He is one of the "mow arounds" in my yard. Those hibiscus stalks behind the frog are another. I need to get out there and cut them off. Or mow over them like usual. 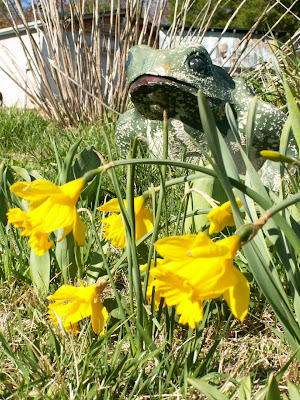 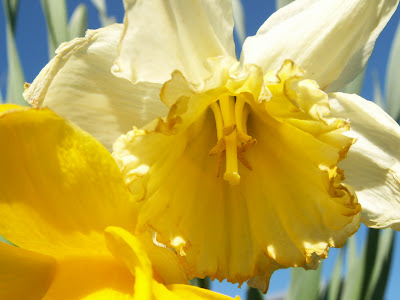 One of these two will be my computer wallpaper tomorrow. 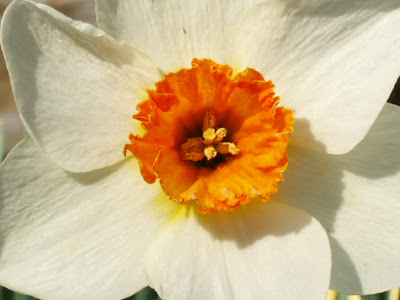 Cows need help with bugs every now and then, so we round them up and spray them with some stuff that helps. Saturday was round up day. 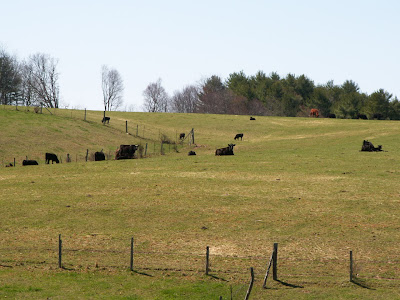 We don't have a bunch of horses to saddle up and go after them with, but luckily we do have a good group of cows. Make them think it is dinner time and they will get up from their afternoon naps and come running. Follow up behind them pushing the stragglers with the four wheeler and they come along nicely. The only thing is they want some results from that deception so they can get kind of pushy and insistant when they start to figure out they have been suckered into something they didn't expect. 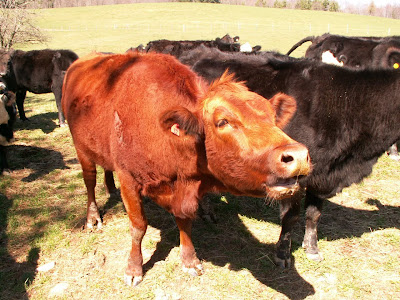 Sometimes that can be just moving to a new hayfield, sometimes it means it is time for weaning the babies from their mommies, but today was for bug spray and splitting the group into mommies and babies in one field and the rest of the cows with the bull in another field. That all makes them more careful and wary about what we are doing moving them around. 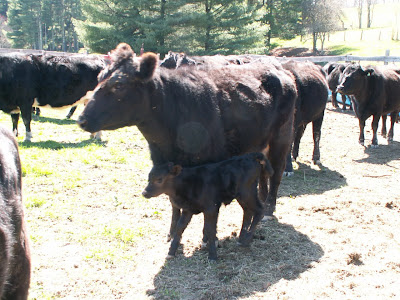 Of course they aren't the only ones being careful about what is happening. Jake likes to stay in the truck when the cows are getting close. We like him to be there too. The rest of the dogs leave when the cows come around, but Jake likes to stay close, too close. Right under your feet if he can't get under the four wheeler or truck, but that means the cows can see him so they come sniffing. In the truck is better, they can't see him. 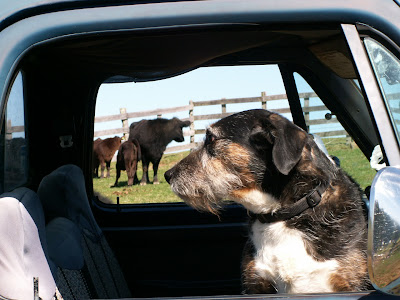 So the cows are sprayed, well most of them anyway - one crazy cow went through the fence - the calves are with their moms and here come the rest of the harem herd heading to the spa with their king. 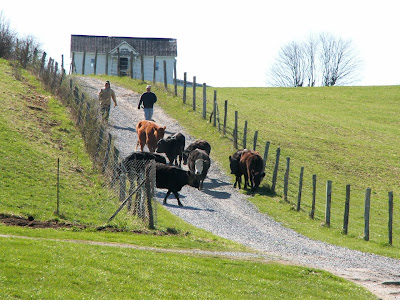 So that was our afternoon of cows. Lots of up hill and down hill jogging in the catch lot. Next - Flowers.

I mentioned somewhere last week that I was making Cinnamon Rolls. These are the result. Well one pan of them anyway. They were tasty, but I have had better. I will have to try again one day. 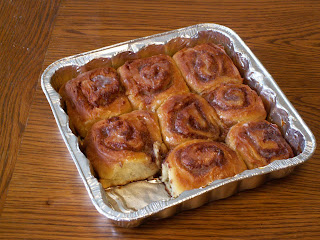 Making them involved mixing up the dough and letting it rise. Then I rolled the dough out and spread melted butter on the dough. I sprinkled cinnamon and sugar all over the dough and rolled them up for slicing. I put them in the refrigerator over night to rise and be ready to bake in the morning. The house smelled really good.
My sister said her recipe is a bit easier. Remove frozen rolls from freezer, put in pan, bake, and pour on powdered suguar glaze. I bet her house smells just as good and no mess.
I would try her recipe, but we all know I like to do things the hard way, no matter how messy it is.
That was post one for the day. I have cows and flowers to come.
Posted by Unknown at 4/05/2009 08:38:00 AM 1 comment: