The Hens Are Now Ruling the Roost

After we moved the chickens from their big brooder pen they needed to learn that their new roosting spot needs to be in the hen house. Not in trees, not on fence posts, and sure not back in the chain link pen.
The hen house isn't really big enough for 15 birds, but we also let them out in the yard that surrounds it every day. When they outgrew that and really needed more room to roam we let them out into the pasture. 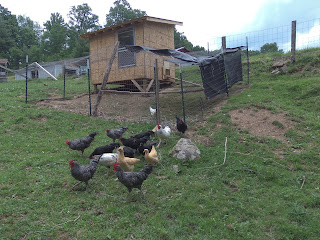 They took off with great ideas of adventure. 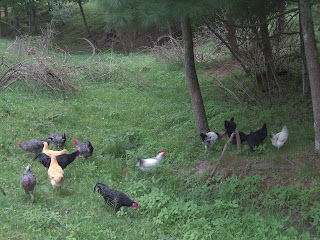 They spent time checking out the woods, the goat yard, and they enjoyed every minute of it. When the roosters started getting too feisty one of the Buff Orpington hens (the gold ones) took to slipping through the fence and lounging in the garden during the day. She would come back to the hen house to roost at night and then hide again the next day.

It is now two weeks later and the roosters are gone.
The yard is quiet. Several of the roosters loved to crow at anything.
The hens are far less stressed and not bothering the garden.
Yet anyway. There isn't anything ripe to eat at the moment.

This was the rooster in charge. 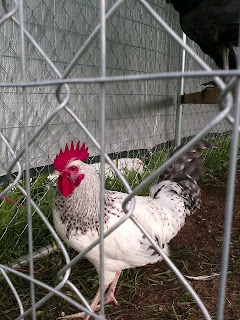 From the beginning he is the one I would have kept if I wanted to keep a rooster.

He is also a photo bomber. 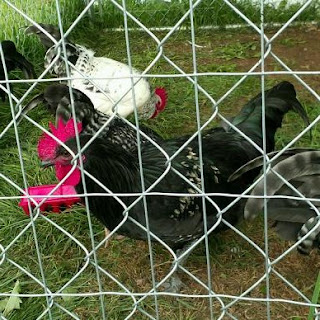 This was one of the other interesting roosters.
The flecks on the end of his wings were interesting.

This guy was finishing a crow. 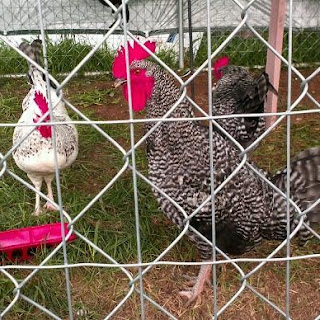 I hope he enjoyed it. 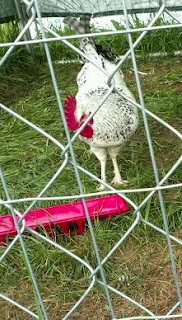 He knows there was food in there at one time.
Almost 14 weeks ago, when they were small it seemed like so much! 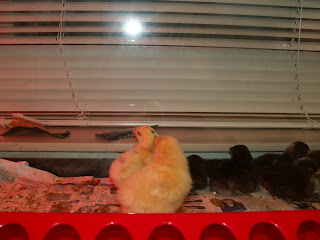 Now we are down to 5 hens after the 10 rowdy roosters have left.
They should start laying in about a month.
We  will need to build some nest boxes soon. 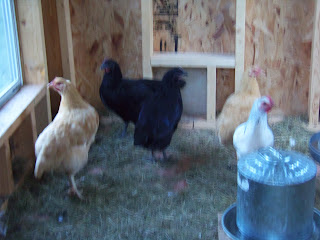 We have chickens so we needed a hen house. 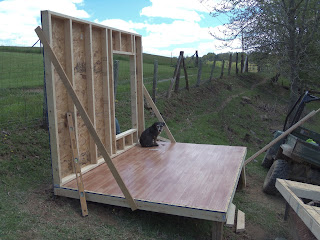 Here we have a wall and a floor. Jake is checking out the faux wood vinyl flooring. I know sort of crazy, but I promise, it makes cleaning much easier. We put it down so that it would be under the side walls to keep things from getting under it. 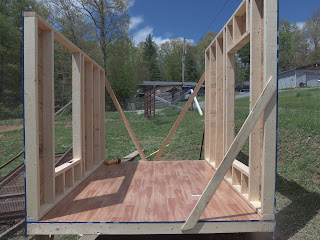 One day FabHub came home and found this had happened to the temporary chicken house.
The wind picked up that whole thing and flipped it. 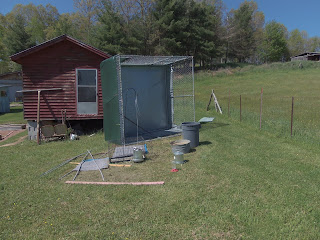 The chickens had spent part of the day enjoying their freedom and were under the red building when he got home. Luckily they had been out roaming enough that they knew where to go for safety. They were a bit skittish about going back in there that night. Their house blew away, I don't blame them. 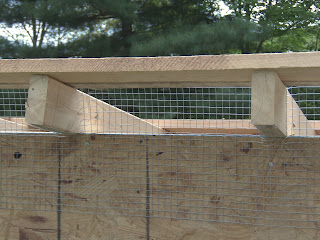 Before the roof went on we added hardware cloth to close the roof vents on both the upper and lower sides of the roof. The part that is nailed to the plywood will be covered with siding when we do get that sawmill lumber. The wire is put there to keep any creatures from climbing into the building. It will also keep birds wild birds from having easy access to the chicken food. 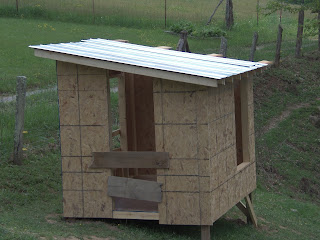 Then the roof went on. Work in progress in this picture. It also still needs the rain gutter. I want to collect the fresh water for them to have when they are locked up. The hens will eventually be out in the woods quite a bit, but at night and while we are away they will be confined to the building and the fenced yard. 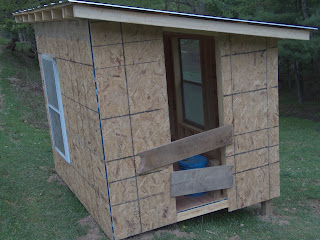 Then the windows went in.
Why are the boards on the door?

Because there are 19 curious creatures willing to take up residence. 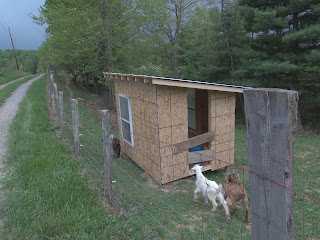 The goats checked out the construction a few times before they were blocked out. 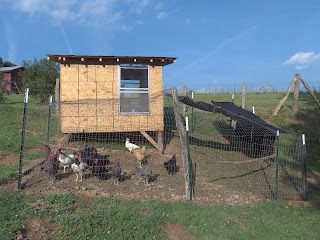 Now it looks a mess, but it will get fixed up when we don't have so many potential escapees. One other thing we need to add is some hardware cloth over the screened part of the windows. Adding it now will also mean the edges are under that siding when it gets put on. The regular window screen won't keep a determined intruder out.

The inside is very roomy for the five or six chickens that we will be keeping. There is lots of light, fresh air and space. This winter when they don't want to go out so much there will be plenty of space for them to stay in, watch it snow, drink some tea, and maybe do some knitting. I am currently using grass clippings as bedding. Between it and the vinyl flooring clean up is very easy. Yes, I need to do that. 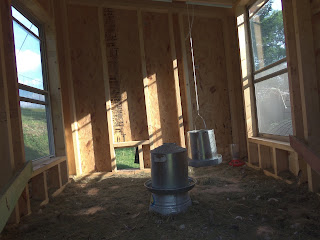 The roosts are angled into the bottom of the windows at the moment. They need to be fixed so that one side has two tiers of roost poles and the other side has a couple of nest boxes. Right now there are too many chickens in there to limit the space and the hens aren't laying yet so the boxes would just become roosts and we don't want them to learn that habit. So that is another upgrade to be added.

That is the hen house. If you look closely at the bottom of the picture below you can see where the chickens new hiding spot is. We had originally closed them off from being under the building, but the shade and grass under there was something they deserved to have access to and now they do. Normally, they would be out under the sunshade, but when I got home today they were all under the building. 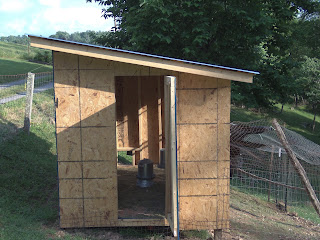 When it comes to the wood that went into this particular building, it ended up being one of the most expensive that we have out here on the farm. It was supposed to get the normal saw mill lumber like everything else has around here, but the timing for that didn't work out. So we ended up buying the 2x4s. There aren't really that many, but when you figure we haven't purchased hardly any for any of the other buildings, it adds up quickly. Personally, I think the chickens will appreciate it.
Posted by Unknown at 6/12/2013 08:00:00 PM No comments: Links to this post

The chickens have grown a lot! We moved them to a permanent building for more space.
More about that in another post.
Here are the roosters wondering when I will let them out into the great woods. 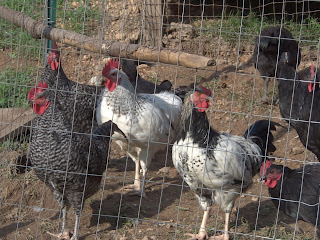 I have been keeping them in the hen house yard so that it becomes home.
I am pretty sure they will come running for chicken scratch snacks so will probably let them out to play this weekend. It should be a great adventure.

Here are three of the five hens wondering when the boys are going to leave. 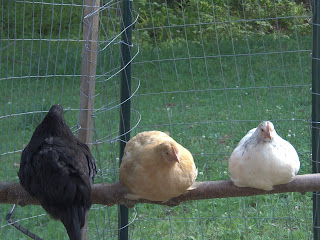 The roosters have started to get a bit rowdy.

Erin, this one is for you. I have been wondering why this rooster has brown spots.
I thought he got pooped on, but the spots seem to be part of the feathers. 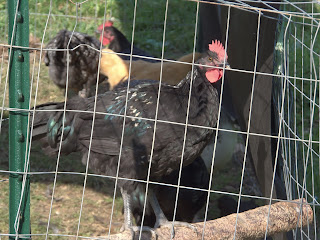 This rooster is wondering if he will stay with the hens or not. 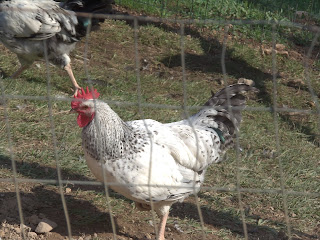 Some people think it is good to keep a rooster for safety.
I haven't decided yet. He will be the last to leave when the day comes.

Another one for Erin, I am wondering where this rooster gets his highlights done.
I never looked up Lakenvelders, but the gold color seems to be odd. 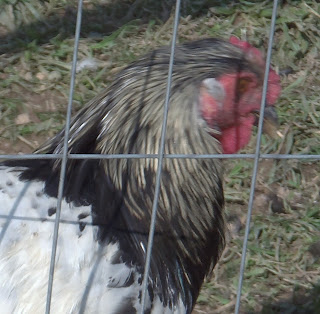