Well, this is the beginning of my final week in Hawaii. Every thing has gone pretty well so far. We sent two of our original four people back to West Virginia today and six more are coming in this weekend. Training is going pretty well, most of the soldiers are happy with the new system. It seems pretty good to me, though I can hardly believe that the Air Force was doing a lot of this 20 years ago and the Army is just catching up. No wonder we (AF) have all the good toys! Tracking maintenance and hours justifies a lot of requirements, but it is getting better now.

We went to see the Arizona Memorial at Pearl Harbor today. The memorial is pretty nice and the museum has a lot of good displays that tell the history very well. 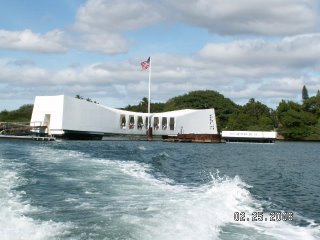 I took this first picture as we were actually leaving the memorial, but it is the best that I have and turned out nicely. 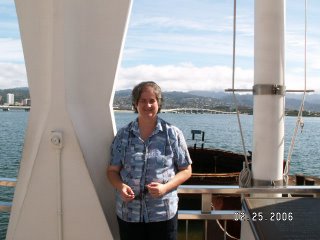 This is me on the Memorial, with part of the Arizona showing in the back ground. There isn't much of the ship showing above the water line and what does show is pretty corroded. 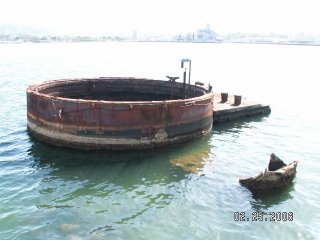 Here is a better view of that gun turret that is showing. I think that is what it is called anyway. It is hard to tell, but more of the ship is visible under the water. Another thing that is happening under water is an oil leak. you can see it every now and then when a drop of oil will pop to the top of the water and then spread out. 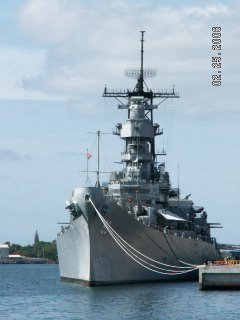 This is the USS Missouri, which is the ship where the Japanese signed the surrender documents. It has been turned into a museum. We didn't go over there to look at it, might have if we had gone over last weekend, but that didn't work out, had to study our lesson plans.


We have had a pretty good time here during the last two weeks, we were successful in the classroom, saw some cool stuff, and built some good connections with the other instructors. This last week is going to be more challenging because of a few factors that I won't go into here, but suffice it to say, I have a lot of work to do, so the week should go quickly. I hope so, I miss Billy, a lot.

I haven't mentioned food this trip!! Let's see the first week, we ate sandwiches from our commissary shopping trip, that weekend we went to Hard Rock, then more sandwiches, except for the day we got a home cooked meal at Travis', then this weekend we ate at Bubba Gumps, you know from the movie, that was pretty good. I expect this week will be more sandwiches since we restocked from the commissary, but I want to go out Friday night, there are a few more good restaurants on Waikiki, the Cheesecake Factory makes the top of my list right now.

I better go now. We are going back to the Swap Meet tomorrow morning. They have lots of good stuff, some of it we can get from the row of shops near the hotel, some of it not, but it is interesting.
Posted by Unknown at 2/26/2006 02:06:00 AM 1 comment: Links to this post

Hawaii is a great place to vacation. I know you have heard it before, but it is true. The weather is beautiful for the most part and even when it is raining it is warm. The pictures below are of my first trip around Oahu. We took off driving Friday (17th) morning and just kept the water on the right. It was a lot of fun.

We climbed Diamond Head, which is quite a hike, and got this picture back toward Waikiki. 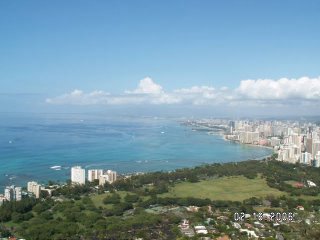 We stopped at several Overlooks and saw all sorts of rock formations and waves. 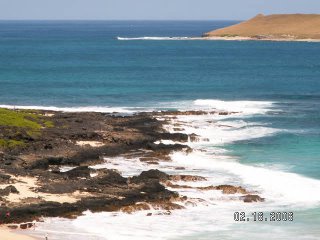 We saw lava mountains. that rose WAY above sea level. 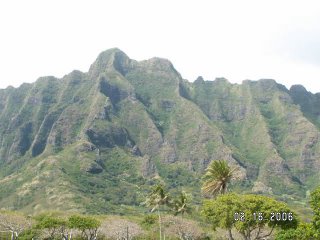 And watched surfers wide waves that came in from all angles on several beaches. If you look there is someone in this wave. 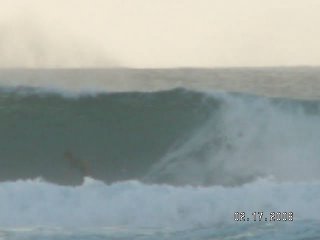 Saturday (18th) we went to the Polynesian Culture Center and enjoyed visiting villages that represented several island countries. There was also a Luau and a show. The picture below is from the show, we got tickets through a friend who is in the Army. The ticket agent really set us up nice, we had front row seats to the show. 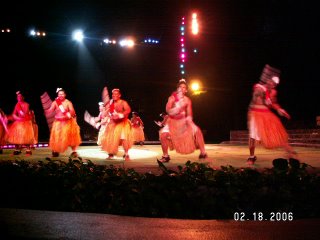 We had a really relaxing weekend. Sunday (19th) we went to the Swap Meet and found some good bargains. Next weekend there are some more people coming in for training. We will probably do some more adventures then. Check back later.

What a difference a day makes! On Saturday, 11 February it started snowing in West Virginia. After it piled up for a while I went out and used the "Snowman in a Can" kit that Mom gave me for Christmas last year. Turned out kind of cute I think, though the missing tooth does make it a WV snowman. LOL 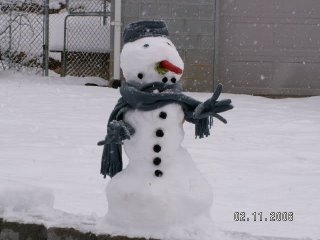 The next day, 12 February (ignore the date, I seem to have something confused in the camera) I was on top of a 10 story parking garage taking pictures of a sand castle that two little girls had built on Waikiki Beach in Hawaii. Good zoom on the camera too. 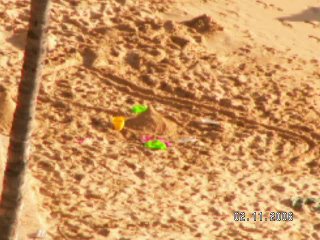 Let's show that difference one more time.
Jenny and the boys might recognize this truck, it shows a Georgia 2x4 in an unfamiliar, but classic winter pose, parked with snow piled on top. 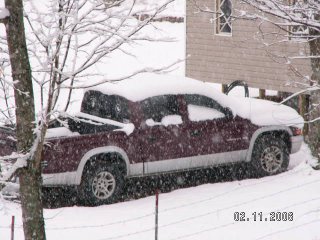 And the opposite, a garage top westward view of the sunset off Waikiki. 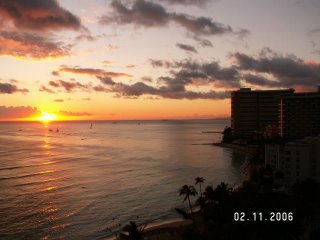 By the way, we aren't parking on top of that garage anymore. My rental is a Dodge 1500 Crewcab, the garage has a 6 foot 6 inch clearance. We didn't scrape the top, barely, but 20 hairpin turns going in and out of that 10 story garage were too many for me. We are now using valet parking, they can deal with it. I have enough to worry about while getting up to speed on this system we are fielding. I will have plenty more to share later, so check back when you can.
Posted by Unknown at 2/14/2006 02:00:00 AM No comments: Links to this post

Hello everyone.
Well, I am between trips again and thought I would update you on our part of the planet, which of course you know is located right here in the Flash Earth picture below. I smudged out the neighbor's property and since this is a pretty old satellite picture, (about 1995 I think) I added blocks that show were the garage and Grandma's mobile home are located. 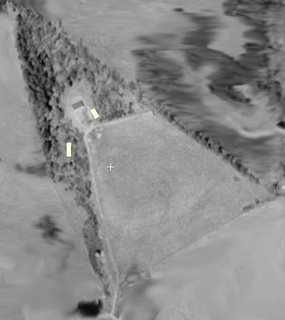 We have been busy since I got back from Louisiana. Mom wanted some lights installed in her living room and since Uncle Harold and Aunt Rose were going to be there for a few days, we hopped in the truck and went down to help. I tried to take pictures of that before and after, but didn't. I did manage to spend all my previoius expense money on new luggage and clothes to fill it up. We had a nice time and came back.

We had guests this last weekend, 3 kids and their parents. My house has never been so busy! LOL We had fun though, made new friends, shot some pool, and ate too much. Hopefully we will be helping them move up here in a couple weeks. Well, Billy might be, did I mention I am going to Hawaii? I would love to help, but I leave on Sunday (12th) and won't be back until March 5th and we really hope they are up here by then.

Well, it is almost 5 and I need to get ready for work. I don't know why I have been waking up so early. Having an exciting job might be part of it. I have enjoyed jobs before, but this one is waaaaay coool. LOL

Talk to you later, I will be checking in from Honolulu in about a week.