As noted in the previous post, this train trip had more than vacation and scenery in its agenda, we also had several northeaster states that we wanted to visit. To this point of my story, we got North Dakota and Montana covered. I had planned our first day in Montana to be a Glacier park experience, but since we had a rental car we decided to drive to Wyoming and get it knocked off the bucket list. In addition to that, the closest point in Wyoming turned out to be part of Yellowstone National Park and Mammoth Hot Springs was within five miles of the border. A plan was set and we had a plan for the six hour drive from East Glacier Village to Mammoth Hot Springs in Wyoming.

We got up early, easy to do since the time difference had us up long before breakfast was being served in the hotel. The best part of our early morning start was being able to watch the sunrise light up the mountains on our western side as we drove south. 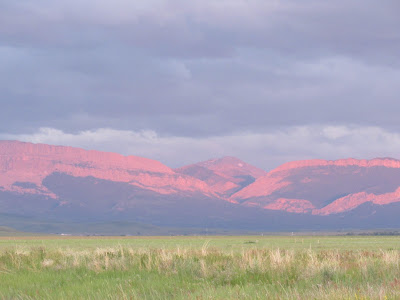 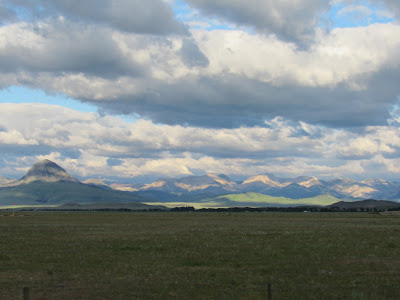 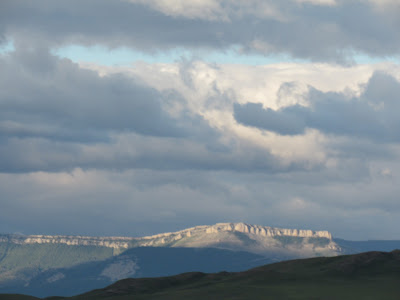 We also saw some animals. Most were pretty normal, like these cows grazing in front of a scenic backdrop. 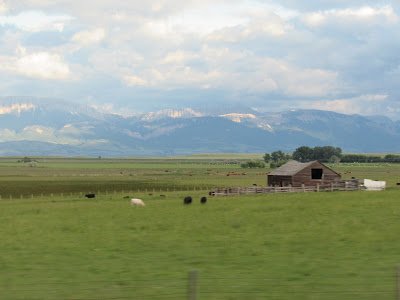 Some were a little different. 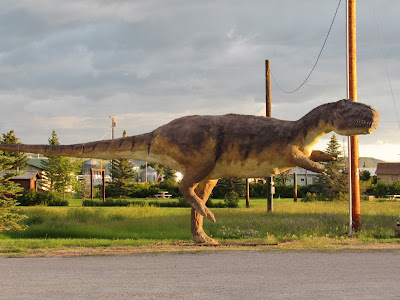 We were lucky to escape.

We stopped for breakfast in Helena, Montana. 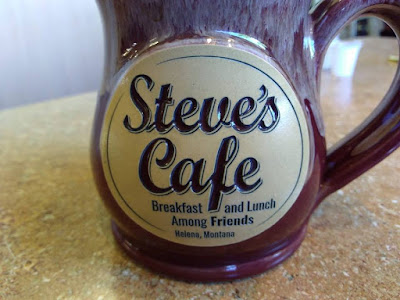 
I enjoyed seeing all the different types of landscape throughout the entire trip. 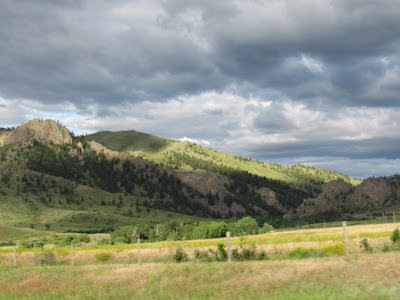 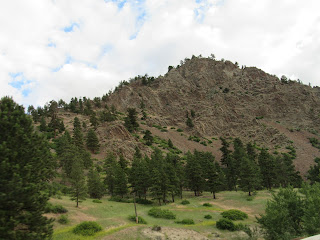 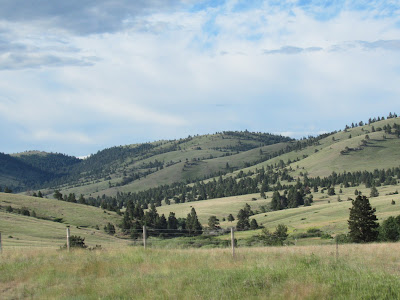 As we drove along highway 287, near Three Forks, Montana, we came across this scene. 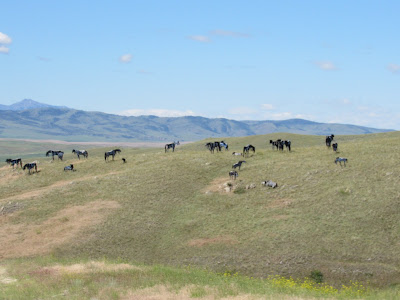 On quick viewing, they seemed real, but are actually larger than life steel sculptures of horses.
The display is called the Bleu Horses. They are painted blue and white to have depth and they manes and tails made of polyester rope for movement. 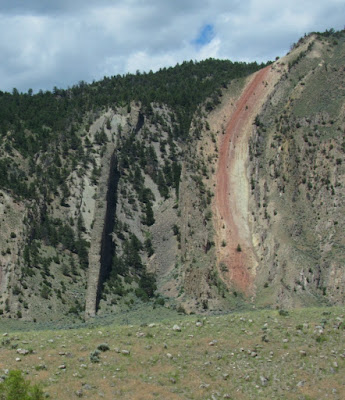 This particular formation is called Devils Slide. It was created when alternate layers of limestone, sandstone, and quartzites were tilted almost vertical and then eroded at different rates. 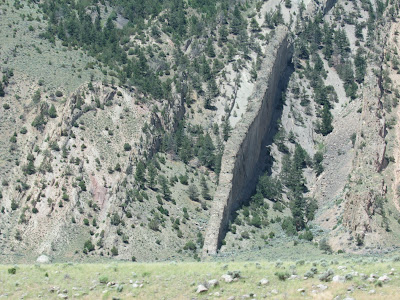 I caught this group of elk while we were waiting to enter Yellowstone. This is a pretty long range photo. I was looking out the window waiting for something to move out on the grassland. That big female on the right caught my attention and helped me get the male on the left. 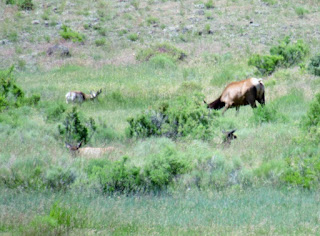 I believe it is a male Pronghorn deer.
Due to weather issues and such, we didn't see many animals on this trip, but at least I got this guy.

FabHub and I have been lucky to travel a lot of the world during our lives. Whether it has been traveling with family when we were young, with the military while we were enlisted, or with each other on our personal Grand Adventures, we have been a lot of places and seen a lot of things.

Here in North America we have covered Canada, Mexico, and a lot the U.S., but neither of us had been to the Northwest or Northeast states. Several years ago we started working on a plan to fix that. First on the list was the Northwest and to make it easy on us we wanted to do it by train!

The original train plan took us through Chicago to Glacier Park and straight into Seattle. That would have left Oregon and Wyoming out of our trip and as states we had never visited. Fixing that problem involved adding Oregon to the trip by modifying the train trip to include Portland as a long lay over for lunch. Story in a future post.

Then we had to get Wyoming into the trip. That was solved since I had chosen to rent a car to get around the east side of the park. The closest point in Wyoming was part of Yellowstone National Park and Mammoth Hot Springs was the most convenient place to visit. Story in a future post.

When we started talking about this trip it was planned for a 25th anniversary. Then life changed and we had to scale back on our adventures a bit. Finally, late last year I got everything organized and during our 27th year together we headed down the track. 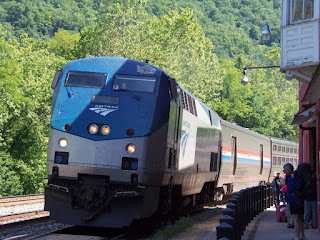 We started our trip by getting on Amtrak's Cardinal route in Hinton, WV headed for Chicago. (FYI, this picture is an old one of the train headed the opposite direction toward Washington, DC.) I opted for Business Class on this part of the trip because it offered wider seats, free coffee and water, and access to the lounge in Chicago. In hindsight, it was not really worth the extra money. The wider seats were nice, but the leg room was slightly less than in standard coach. The coffee was good though.

Our first stop was in Chicago where we changed to the Empire Builder. While in Chicago we went to the lounge and checked out their amenities, which were to include drinks and snacks, a place to relax away from the crowds. It was crowded and the snacks were gone, but they had drinks.

We had a few hours in Chicago, so we went for a walk out on the streets around the Union Station. Everything was clean and people were friendly. We even met a Concord University student who had been riding in coach on our train and was on his way to a Wisconsin Dells vacation. 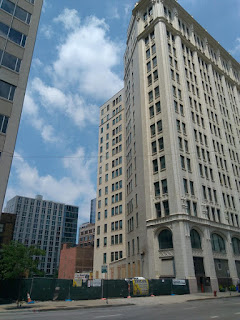 We decided to eat lunch at a local place rather than in the station and after a bit of Internet research I found Lou Mitchell's. Not much more of an iconic location to go for lunch. 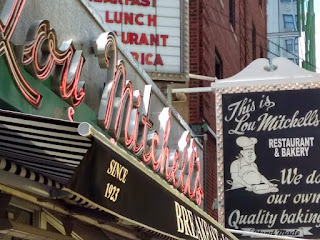 The food was delicious! We even bought some bakery items to go with our morning coffee.

Once back in the station we returned to the lounge and waited for the call to our train. This leg of our trip left at about 230 pm and would arrive at East Glacier Station in Montana at about 630 pm the next day. I reserved standard coach this time. The seats are side by side closer together, but as noted above, slightly further apart in leg room than the business class seats.

Our ride through Wisconsin and Minnesota was mostly in the dark, so we slept through the majority of it, but when we got into North Dakota the train ran straight north for a while and allowed me to get a beautiful sunrise photo. 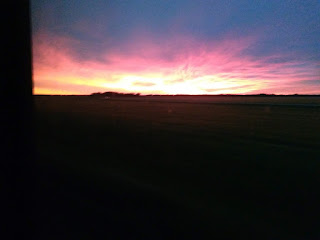 Further on in the trip across North Dakota we saw a lot of prairie, some rivers, and long distance views. 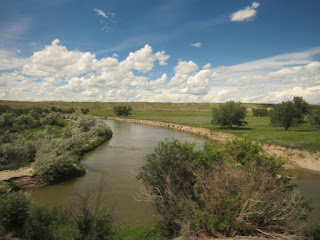 Getting on into Montana was much of the same and then we started seeing some "bumps" in the scenery.

Then as we got closer, and after doing some research, this one turns out to be the Sweet Grass Hills. They are visible for miles around because their elevation (about 6500 ft) rises about 2000 feet above the surrounding prairie. They are near, but not part of the Rocky Mountains and were created to their current form by being pushed up from below, solidified, and erosion. 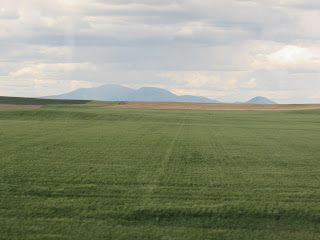 Getting even closer gave me a view of Gold Butte behind a field of Canola. 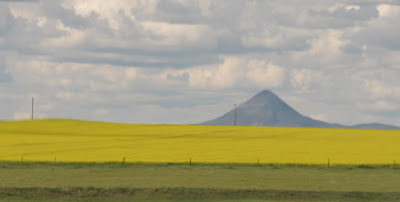 And then we got closer to the Rockies. These are all late afternoon sunset pictures. 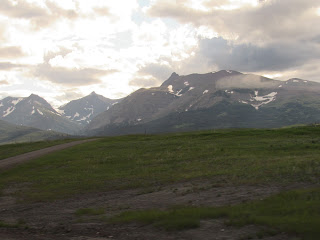 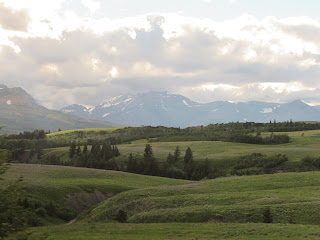 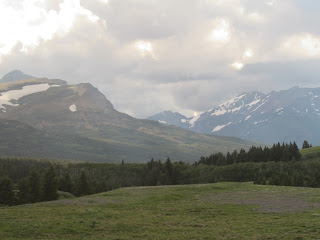 Arriving at Glacier station was exciting. We have been looking forward to this for years now.
This metal sculpture of a Blackfeet Warrior is near the rail depot and on main street. 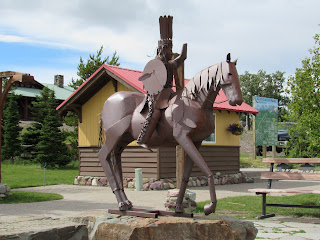 A bad picture of East Glacier Village, but there it is. We picked up the rental car from a desk in the building on the left. It was a general store, deli, car rental, gift shop. 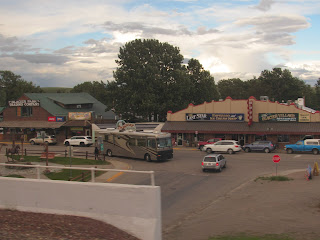 The Glacier Park Lodge was within walking distance of the depot. It was built in 1913 by a subsidiary of the Great Northern Railway. 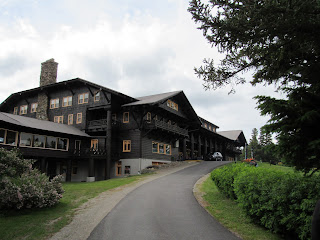 Inside the lodge is three stories and was built using 40 foot Douglas Fir logs. Our room was on the third floor in this picture upper left corner. The room was so uninspiring that for some reason I did not even take a picture. Honestly, we were not in the long enough to worry about it. We arrived late the first night. Left early, came back late, socialized downstairs, and then went to sleep. Then checked out early, but we did come back later in the day to socialize while waiting for the train. 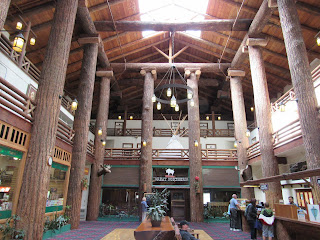 I will try to describe it though.
If you can imagine a room about 10 x 10 with a queen size, a small desk and a chair taking up most of the room.  Well, other than the 12 inch square support beam in the middle of the room. Oh, and the four foot square bathroom in the corner. It really was enough.

Hey! I just realized, the whole bathroom was EXACTLY like Mom's spare bathroom, only a bit smaller and no window. Put it this way, I bent over to pick up a piece of paper, I hit my butt on the shower wall, my hip on the sink, and my head on the door frame all at the same time.

The only issue I did take with the room is that it was supposed to be a view of the mountains or park. We were last to check in from the train, so this is what we got. 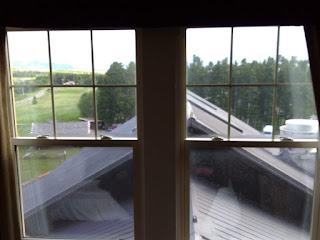 That is the kitchen roof. If I stood on the right I could see the mountains and a playground. There were rooms with "obstructed" views. This was supposed to be one step above those.

Lesson learned. Even if you make reservations 7 months ahead, don't expect that the property cares. If you want a view, and think you paid for one, and your check in will be late in the day, call ahead early in the day to confirm your reservation and ask to be assigned a best available room. I know they will tell you they can't do that, but at least you tried.

Next post will be out trip to Wyoming and Yellowstone.