It snowed - we got about 4 inches of fluffy dry snow. Not good for snowman making, just good for mud. I generally work by the school schedule on days like this. If school is two hours late, I at least wait for the sun to come up so I can see what is happening in front of me on the road. If school is closed, I take it under advisement, but usually go in, slowly. Well, today when school finally went from late to closed I couldn't see across the yard. The snow was coming down hard! I waited a while longer and it wasn't really clearing up, so I made the call to skip the work day. I have plenty of vacation time, nobody was relying on me for anything today, why get out on those roads?
Ok, so I do know how to drive on snow. I just don't trust the other people out there. Of course once I had committed to not going to work the weather cleared up and though it never warmed up, there really was no reason Not to go in to work, but since it was already 3 hours into my regular schedule and would be 4 hours before I got there, skip it.
Instead I pressed the fact that Fabulous Hubby needed new tires on his car and used my research skills to find some at Sam's that didn't have any negative comments. Michelin X Radials in case you are wondering. The GY Assurance series have great sounding features, but plenty of bad comments. Could just be that more people have them and most people only bother to comment on something if their situation turned out bad, but I went with theMichelins anyway. Of course while we waited we did some shopping. Glad we didn't have my truck, that treadmill would have fit in the back very nicely, but I can use the one at work. I am sort of afraid to buy one, I figure I would not use it as much as I should. So when we finally escaped that store we came home and I helped FH feed the animals. Well, I chased the cows away from the barn while the door was open and fed the dog. I took lots of pictures though!

Winters around here are not as much work as what I remember from Minnesota, Dad had a lot more animals for one thing, but what we have here is enough to keep us busy. FH would like more cows and land, but for right now we are good.
When feeding the animals the first thing he has to do it get dressed for the weather, and then get the tractor. 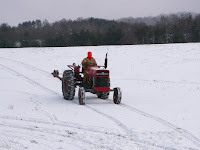 During the winter this tractor has a bale unroller on the 3-point hitch. It spears the bale from both sides and then you can pick it up and haul it out to the field. 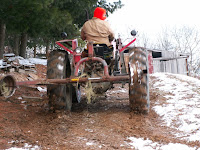 Once the bale is in the field he cuts all of the strings off and collects the pieces so that the cows don't eat them. One long string could cause a lot of trouble in a cow's tummy. 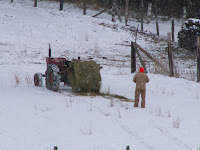 Then he drives around with the bale unrolling from the spears. He has to make sure he has the bale picked up on the correct side though. It is like a roll of toilet paper, if he tries to unroll it from the wrong side it just keeps going around and around. 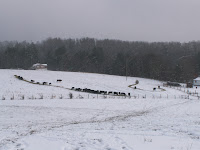 So you might notice the tractor is pointed to the left in the first pictue and the bale was unrolled to the right. He had to set it down and move around the other side to pick it up again. This was the second bale he put out today. Most of the cows are munching on the first one already.


The dogs took advantage of the time I stood still to start playing. They seem brutal sometimes, but they don't really hurt each other. Jake does try to stay out of the way though. 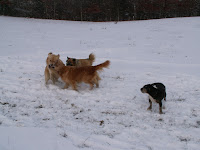 Unless he wants to beat up on Shadow anyway. The other three have a lot of hair that gets pulled on and he just doesn't fit in with that game. Jake is fast though. When he gets them chasing him, watch out! They are coming through.


Shadow is on the left, Poochy is in the back, Gabby (Shadow's mom) is in front, and Jake is on the right.

Next on the agenda was feeding the steers named Dinner (the big one) and Supper. They are on a hay and grain diet for a while before they meet the plate. 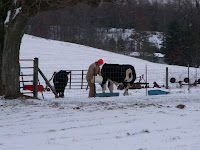 Yes we name them and crudely at that. These particular names get used every other year or so. No need coming up with something special. 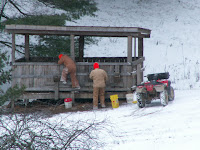 Speaking of names - Gordy, Babe, Porky, Wilbur, and Miss Piggy - any idea what type of animal is getting fed in this lot?

Next were the weaned calves. 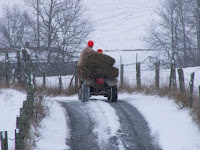 There are just a few of them right now so they get a couple of squares off of the four wheeler. Bales I mean, not the guys feeding them. haha.


Where was Jake during this part of the feeding? 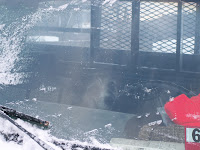 Keeping his butt warm in the truck that's where.

Last but not least is Poochy. She was Grandma's dog and now I am her best buddy. 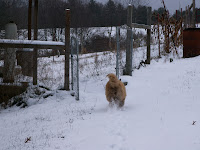 We like to know where she is at night, mostly to keep her from barking under our bedroom window, so she has her own yard over at the trailer. She doesn't usually put up too much of a fuss about being locked up. She gets her dinner and then pops into her cave under the porch. FH lets her out again in the morning on his way to work. 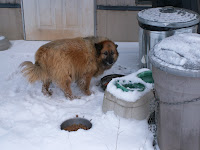 Some left over pictures show the winter scenes that I ran across. 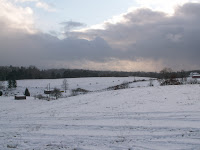 I usually like to run that far field.
Looks a little chilly today.


I was trying to catch FH's shadow in the still water of the pond. I did, but the focus is on the fence. Kind of interesting anyway. 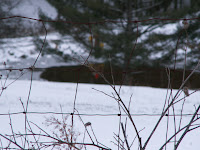