It has been a while since I was here and I figured I ought to add an update.
We haven't really been up to much. Winter is here with a freezing attitude most days.
We had visitors for Thanksgiving. My mom and brother were here for a few days. Gas prices were pretty good for that type of travel, but we still hadn't recovered too well from some recent expenses. So we didn't do much of anything, which made from a nice quiet visit. I made ham, turkey breast, corn pudding, green bean casserole, potatoes, rolls, pies... we ate well.
We went shopping on Black Friday, but not until about 9 o'clock. First we went out to breakfast, then over to Lowes where we found Mom a microwave stove hood that she has been wanting and Billy found a sale on an 18 volt drill that he has been wanting. Both were accidental finds. I guess if we had read a sale paper we might have been crazy enough to go out earlier, funny that the stuff was still there anyway.
Heard a funny story while we were at Lowes. Seems that when they opened the doors at 5am to let the early shoppers in, two guys had a plan. They ran to the display of tools right behind the registers and grabbed a couple of items and then headed out the exit door. We figure they thought they could get in and out before anyone was able to respond. The plan would have worked too since most of the staff was deeper in the store and the cashiers were still in their morning meeting. The plan failed because, wait for it... the exit doors hadn't been unlocked yet. The would be robbers ended up looking at the automatic doors wondering why they wouldn't move while the security guards walked up and collected the merchandise. LOLfunny
Wal-Mart was next, but mostly for some groceries. I think we might have picked up a couple of sale items, but still not on purpose.
After that we went home so Billy could feed the cows. You should have seen us packed in the back seat of the car! See, the stove hood didn't fit in the trunk. So the front seats were slid forward and two of us squished into the corners of the back seat. Glad we hadn't gone to shop somewhere further from home!
That afternoon we headed back out to the mall and checked out some sales there. I found a new Stephen King book and Mom found some clothes. Then we went to see the movie Australia. It was a really great movie. 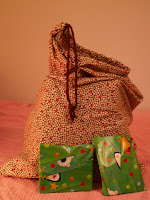 The only other thing we did was to pull out the sewing machine that Mom bought me a few years ago, yes, years. I just never had a project in mind to use it. Then Bill decides we could make him a bag that he can use for a classroom project. So Mom helped me set the machine up and we made a bag. Really nice rectangle of material with a drawstring even! The project turns out to be a grab bag for Bill's advisory group at school. We picked up a bunch of dollar store stuff and he wrapped them for the kids. They should have fun with that.
Cyber Monday was a pretty good shopping day. I found us a present and a few more for others.
Last week we processed a hog into the freezer and jars. We used the vacuum sealer instead of freezer wrapping paper this year. It was pretty easy and should keep the meat fresh longer.
This weekend was my company Christmas party. We had a lot of fun this year. Lots of people showed up for food, drink, and music. We got a bunch of people out onto the dance floor and did some goofy things. It was a blast.
So that is the last month or so at our house.
Oh yeah and I have been designing more T-shirts at Cafe Press. Bill wanted some seasonal shirts to wear on Fridays so I made him some. Check out the links on the right. My store's name is SCreations.
Posted by Unknown at 12/13/2008 07:19:00 PM No comments: Links to this post