The potato haul for this year is pretty good. 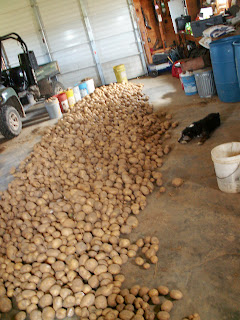 Tomatoes on the other hand won't ripen. 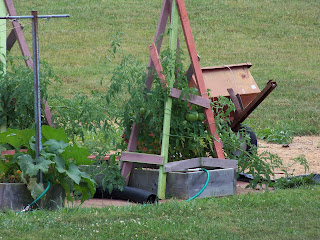 When I went to work this morning we had a shingle roof that really needed replacing. 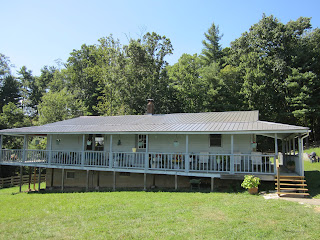 When I got home tonight we had a new metal roof! 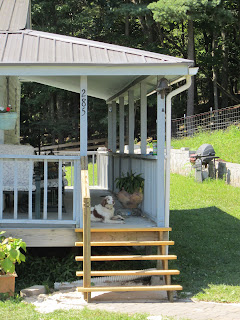 Molly seems to be pretty happy with it. 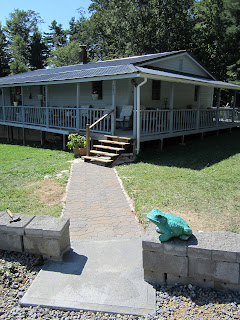 Sunday Drive and the Spa Dog

This weekend we needed a reason to get away from the farm and all our projects.
So Sunday we did a little driving around on a road we had never taken to see where it went.
That is one of our favorite pastimes.
Even if we get sort of "lost" it is fun to be on a road we haven't been on before.
Usually we take TomTom, but this time we went into the wild with no map.
We found places called Odd, Josephine, Coal City, Rhodell, Amigo, Corrine, and Black Eagle.
Somewhere out there we saw this wall.
I made FabHub turn around so I could get a picture.

Then we found the Wyoming county border and knew where we were again.
So we went to Mullens, Alpoca, Bud, and Herndon Heights,
which is where we went past a very familiar house.
FabHub's grandparents moved into this house back in the 1950's. They had huge gardens, worked the fields with horses, milked cows, the whole works. Water came into the house with a pump from a cistern for a long time and then a well was hooked up.
When I first went to Grandma's house (1992) there was no hot water in the kitchen. Only the shower and laundry had a water heater connected. Then the county ran a water line through in about 1993 or so. That got her off the well and her boys got the the hot water line fixed to the kitchen.
The house was heated with coal and wood stoves until about 1994, which is when propane wall heaters were installed. The heaters were easier to use than the stoves, but there were so many holes in that house her annual propane bill was about $3000.

Anyway, I bring all that up because we were honestly shocked to see that someone is living in that house.
That house had issues. Serious issues.
They put a metal roof on, but we will have to wonder about how the rest of the problems got solved.
Or if they did. The good news is, that house isn't on our project list anymore.
So, we drove down Jug Holler where it is so steep that FabHub and his Mom slide backwards one frozen winter day, only to be saved by the bumper finding a tree.

Then we headed home and appreciated everything we have even more.

On Monday evening when we went to feed the goats Mom's dog Molly decided to have a spa. 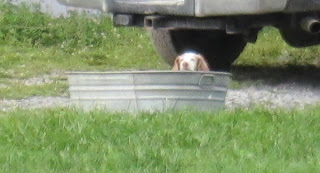 She jumped out when we called her.

And I guess it is our fault for leaving the water out there for her.

But she really shouldn't do that right before we go in the house. 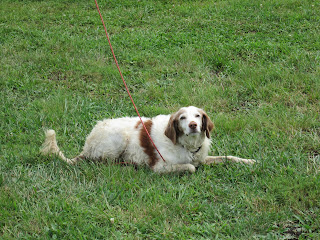 She doesn't like being tied out while she dries off.
Not so smiley now is she?

She has been a good dog - since we fixed all the fence holes that she found for us.
She even showed us several times that the pipe under the driveway
is clear enough for her to travel from one field to another.
Now she makes her rounds to all the corners of the yard to make sure no new holes have appeared.
Then she hangs out in the front with the rest of the dogs.
Just waiting for cookies or a chance to go in the house.
Posted by Unknown at 8/06/2012 09:55:00 PM No comments:

I got home from work last week Monday and found FabHub working on a project.
We moved into the house in 1996.
Projects never end, but this one is long in coming and I love it!

He kept working after dinner to get to this point.
That pipe?
That is the drain line left behind from when we lived in the mobile home while building the house.
The pipe was cut off and capped.
And my weird block and a half steps are gone too.

The dirt from the trench is going behind the retaining wall.
Filling in the rest of it is another project.

When I got home Tuesday the trench was finished and my steps are gone.
Good thing there are a second set in the backyard.

Now it is time to fill the trench back in.
First is the weed block fabric, which is probably not doing much since the ground is so solid.
It may be keeping the gravel from sinking into the dirt though.

The next morning was foggy, but things are starting to look good.
You know each project comes with a new tool, right?
That tamping plate was it for this one.
I got off kind of cheap this time.

That night I got home and found a lot of work done, but he needed a dozen more pavers.
When we got back he had decided it was all wrong and needed to be reworked.
Honestly, it was a little wobbly in areas.

Jake was disappointed that the project was extended.
Laying pavestones does not include much Gator riding.

But due to all that experience from the first attempt, the second - or was it fourth? time,
everything went down beautifully. You can't see it above because it is covered in sand.


Much easier to see in the morning after having been watered and swept a few times.


And then Friday evening we had steps again.


And finally on Monday we have a hand rail and the dirt piles are gone.
Now for the step on the close end we need a bit of concrete.
There is also some landscaping that needs to be done.
The dirt on the right side is higher than I can mow over, but we are having a picnic in a couple weeks and don't want that to be all mud/dirt for that day so fixing that will wait.
Check back in a few days I should have the step and maybe even another project done.
Posted by Unknown at 8/06/2012 08:39:00 PM No comments: