I found this picture on my camera when I wanted to post the new baby calf.
This is FabHub and his sidekick delivering dinner to the cows. 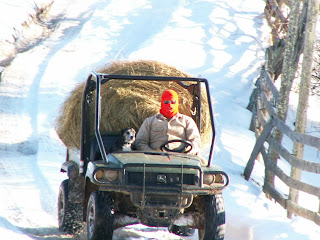 They look like a couple of gangsters don't they.
This on the other hand is the real gangster. Her name is Rasberry and she is a bit crazy. She has been running away from people since the day she arrived on the farm. We bought her at the market when she was already two months pregnant. We had no idea what kind of bull she was bred to and honestly we don't know what kind of mixed up cow she is either. Her face is Angus, her high waist line and the white belly are not, but that might be Limousin. We don't know. 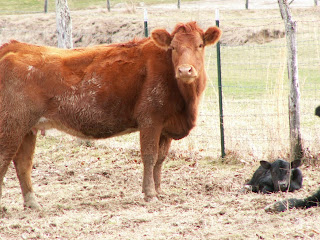 What we do know is that the little black spot in front of Raspberry is her new baby - I call her Blackberry.

As soon as the guys got close enough to give her something to eat and tag the calf, Momma and the baby did a sprint out of the area. 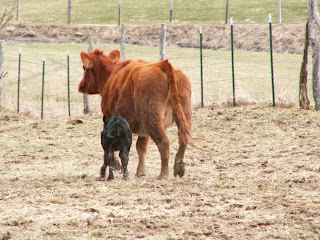 They caught up with her and since the baby was kind of tired from the jog the only trouble they had was keeping an eye on Raspberry so she didn't knock them out of the way. 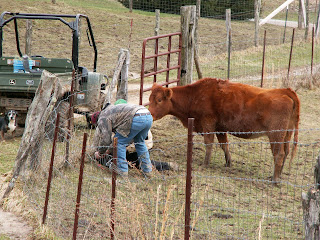 She kept a good eye on the process. Lucky for them it was a girl. A boy would be an additional procedure that might have taken too long for her patience. As soon as they were done Momma and baby where off again. 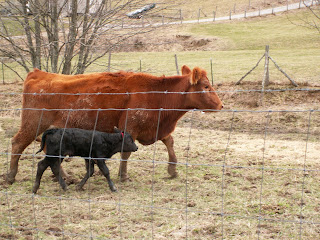 Blackberry is a pretty little thing. Not a drop of white on her. They are doing good now though they still aren't getting near the other cows. Raspberry doesn't trust anybody at all.
Posted by Unknown at 3/19/2010 09:16:00 PM No comments: Links to this post