Spinners and the Stolen Lawn

We made a couple of additions to the garden this weekend. The beans needed something to climb so we added these old clothes line poles that I bought at a yard sale about a dozen years ago. They have been waiting patiently to be used. FabHub attached them to the raised bed frame and then strung cable between them. We had some old burlap like rope so that was used to give the plants something to hang on to. We haven't tried this before so we will see what happens. 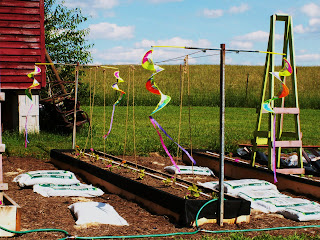 Then we added the spinners as an attempt to confuse deer, birds, dogs, anything that wants to get near the garden. Here is a tip - try to buy something like the spinners that is "Made" to be in the garden and you might pay $3 or more for them. Go to the Dollar store toy section and you can find them with the handy extender sticks for $1.

Last Thursday, June 3rd, I came home to see my BIL had a mess on his lawn where he had mowed and left the cut grass in rows all over the place.
So, Friday, while he was at work I went down there and used the sweeper to "steal" his messy lawn. I wanted the cut grass to mulch the in-ground part of the garden. As you can see, he had plenty to share and didn't mind losing it at all. 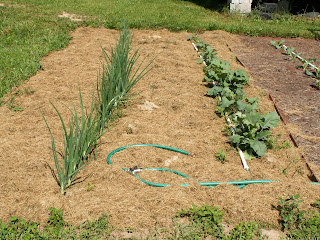 Yes, I see the weeds popping through I will get them. By the way, BIL didn't even notice. He saw it was gone, but it rained after I finished and he thought the rain had knocked the grass down into the lawn. What he hasn't noticed yet is the two zucchini plants that I put in his garden. I just hope he doesn't try to give them back to me! I didn't think of that before!
Other than that everything is growing nicely. Thanks for visiting our garden.
Posted by Unknown at 6/08/2010 09:26:00 PM No comments: Links to this post

The garden is enduring another experiment. Last year we knew we were not going to be able to keep up with the garden, so I covered most of it in plastic to keep the weeds from taking over and to kill the weed seeds that I knew were there. This year we decided to cover it up again, but this time with some contractor grade weed block, with mulch on top of it, and switched the whole garden over to raised beds. 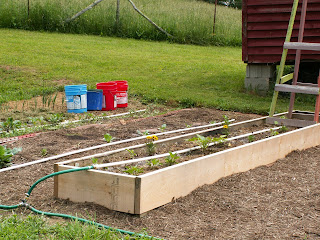 Before we got the first of the raised beds done FabHub planted some onions, kohlrabi, and cabbage in the ground. The first raised bed got banana peppers, yellow squash, and cucumbers. The second bed got tomatoes.

And then everything except the onions froze.
We had it all covered, but took the covers off before work. oh well. What can you do?
So we mostly started over again.
Now we are back to all the originals, plus some zucchini with the squash, basil with the tomatoes, beans got their own space, and more peppers and watermelon on the end. Mix in a whole bunch of flowers and this should be a really interesting picture in a few weeks. 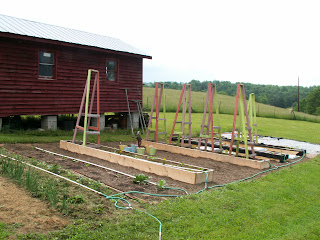 The first two beds got "topsoil" from a local By the Scoop seller. I saw the hillside he was digging the dirt out of, not much Top to the middle of that hill. The dirt was about as poor as what I already have, but with fewer weed seeds.
The next two beds got bags of "topsoil" from Lowes. They had 40 pound bags for a price that wasn't much different from the By the Scoop place and of course since FabHub had his new big boy truck with us at the store we had to buy a whole pallet. It was a load and we didn't use all of the dirt, yet.
In an attempt to protect the raw wood I lined the boxes with more heavy duty weed block. I don't know if it will work, but I tried. I just really didn't want to use treated wood for food. 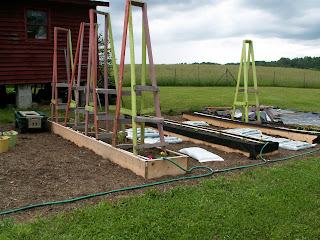 Just in case it ever stops raining, I created an irrigation system to get the most out of the hose when needed. Water comes in to the bottom of the first Y and up the left side PVC to water a row or box and then out the right side hose to the next bed. Repeat all the way to the end. 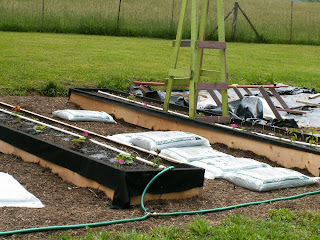 We are going to build two more boxes later. That will mean more dirt, more cutting up garden hose, and more plants.
I don't know if I will need that irrigation system with skies like this though. 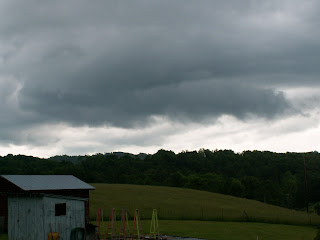 But never forget that no matter the weather we can always dance among the flowers. 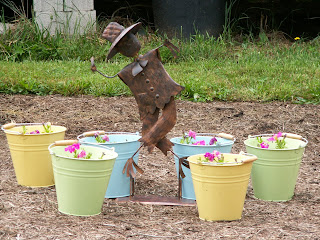