Another new goat! Yay! And this time it is my favorite yearling girl Violet that had the baby. It is a boy and when he gets his ear tag it will be number 32, coincidentally the same number as my race car in Germany that was called the Racing Ace - so this little guy gets the Ace name! 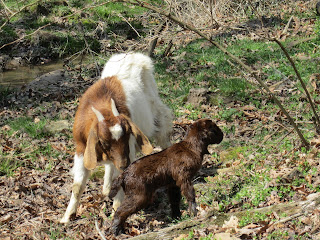 She was pretty hungry, so I brought her some grain. It has been a couple of hours since I saw them and I need to go check so I will bring her some more and some hay, if I can sneak it past the other girls. They are pretty smart. 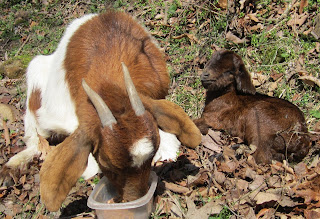 This is an update photo of Clover, the first baby goat. She is pretty rambunctious and needs some friends to chase around with. Ace is the first of many who will give her some friends and get her to leave the other Mommas alone. 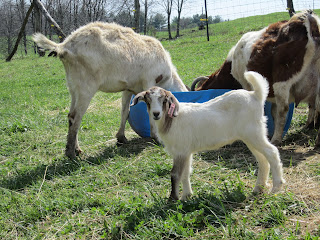 The goat on the left is her Momma Flower and the one on the right is my "other" Violet who is one of the rescued goats. She is about five years old and ready to explode with multiple babies. She just keeps getting bigger and bigger. She has a sore foot and the weight makes it even worse. I make the other goats wait for feed until she catches up though. Well, time to check on Ace.
Posted by Unknown at 3/28/2012 06:34:00 PM 1 comment:

It has been a long time since I posted anything about calves. Everything seems to be about goats lately. This is our newest calf born Sunday, March 25th. 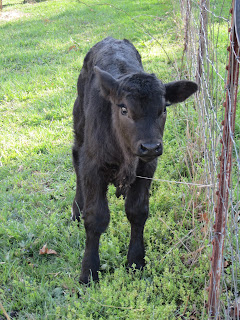 FabHub and Best BIL had to pull him into the world because he is pretty big. The Momma cow didn't deal with the trauma very well and won't have anything to do with him, so we have a bottle calf. A big bottle calf.
Unfortunately, we also have another bottle calf. He is better than a month old, but you can hardly tell it in this picture. Now - remember the other calf is pretty big, but which is which? 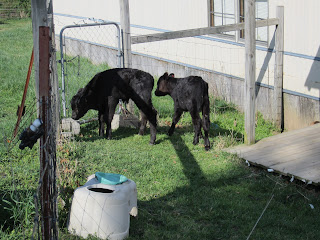 Would you believe the one on the right is the older calf? Me either. I said he was small when I first saw him, but stand him next to the new one and Oh My is he small. He ended up being a bottle calf when his Momma passed away. We thought she had a low magnesium disease called Grass Tetany, she laid down and couldn't get up. When my cow Cherry showed the same signs we called the vet to see if there was something we could do. There are a bunch of cows out there and we had to figure something out.
Turns out that the problem is nutrition related, but more because of low hay quality than the disease. The vet told us it has been a common problem in the area this winter. We don't know why, it just happens. That seems like a bad answer. What seems to have happened is the cows were weak and then went into heat so the bull got up on them and their legs couldn't support his weight. Cherry has a severely damage knee ligament is the best way to describe it I guess. She won't have any more calves. Luckily this last one of hers (not pictured) is really nice. So she did her job well for quite a few years.
Well, that is cow news for the moment, back to the goats.
Posted by Unknown at 3/28/2012 06:15:00 PM No comments:

The Real Meaning of MPH

Look what we found in the goat yard this evening! 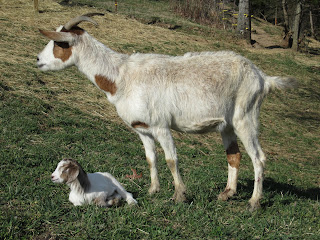 Flower had a baby!
It is a little girl and I named her Clover, because it is almost St. Patrick's Day.
We had hoped that Flower was pregnant when FabHub bought her.
She has been acting sort of ill lately and I was getting concerned.
I guess she had a reason. 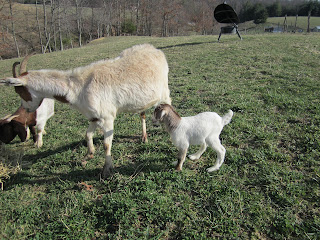 Flower was hungry so I tried to feed her away from the other goats.
They came over to see what she had and Clover followed everybody. 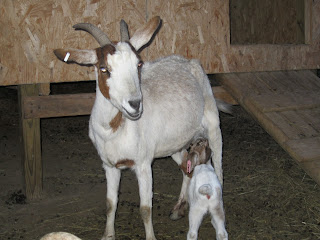 In the evening we went out to tag her and put some iodine on her cord.
She hollered a bit and then got some dinner.
I am glad I got the ear tags stuff already.
Pink for the girls and blue for the boys.
That will make them much easier to sort out when we need to separate them.
As we were leaving Clover walked under the building to lie down and Flower crawled after her.
I figure that is where most of the babies will go.
It is a small space with good visibility.
That is our fun for Wednesday. 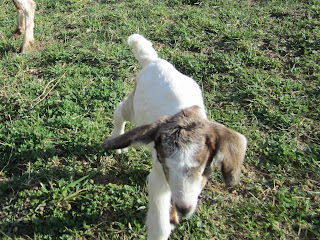