End of the Midwest Adventure

I am finally catching up on my last post of vacation, the book needed an ending or I might have let it go.
This should have been posted about the 23rd of July - so only a bit more than a month late! Hey we have been busy - ok not so much. Facebook junk takes way too much time out of my available Blog posting time. I think the farms, farkle, and the mafia are going to have to do without me for a while. Right after I harvest the crops and water the flowers, try and get the top score for the week - I still hold the "All Time" record, and try to figure out the purpose of the gangster routines.
Maybe I can get the new cow pictures blogged over the weekend and get my "My Points" account straightened out. Neglecting that account is really sad, it actually pays for itself!
So on with the end of the Great Midwest Adventure!!
Our last few days on vacation were spent in Georgia. Mom figured out how she was going to get her new car (post from 22 July) so that part was done. So our next stop was a new favorite restaurant. 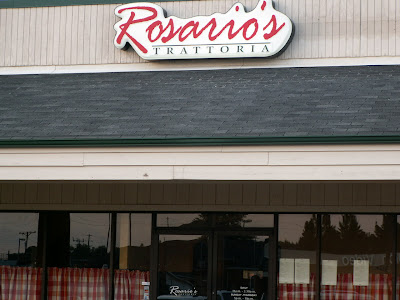 Very traditional type of Italian cooking - to us non-Italians anyway. It was delicious and we will go back.

This is a metal flower outside of one of the stores nearby. 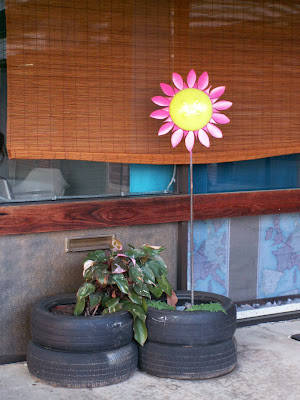 Seems simple to make. Just have to find the right materials.

There is more to see in Mom's neighborhood, but I have posted most of those things in previous posts. There is the pig on the roof of the BBQ place and the double cannon by the court house. We didn't go back to those, been there done that. We did go see the new Harry Potter movie - the first day time showing in the theater.

My review - The movie left me hanging at the end just like the book did plus they skipped a bunch of stuff. I hope you read it before seeing the movie or some things probably didn't make sense.

On our way out of town on our way home we stopped at Jittery Joe's to pick up a coffee to go. 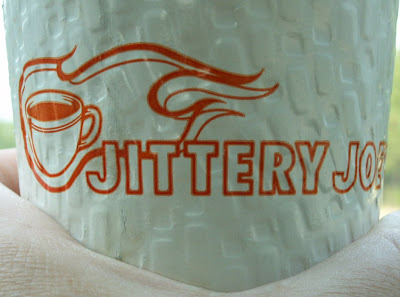 We used to go here for our Internet fix while at Mom's, but now we have wireless at her house so we still get Joe's coffee, but spend less time.

Some amazing and fun things that we saw along I85 start with this secure but crazy load. 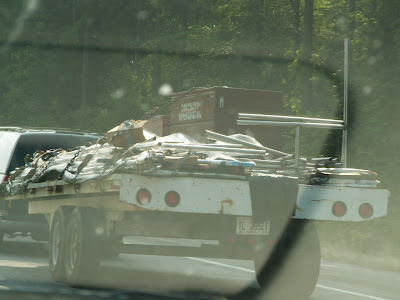 Not exactly sure this is legal, but it was sure worth the picture. That is a small SUV pulling a converted double axeled flatbed of some sort. It didn't look right even if it was legal.

Then I finally caught our favorite billboard in a picture. 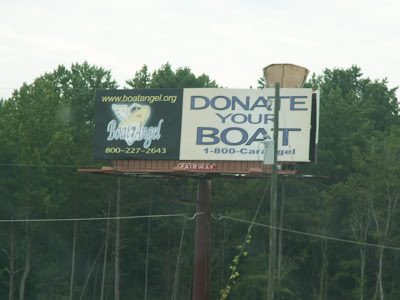 There are about five Donate Your Boat signs along the road. Kind of hard to catch in the wild though. They were sneaking up on me along the edge of the road. 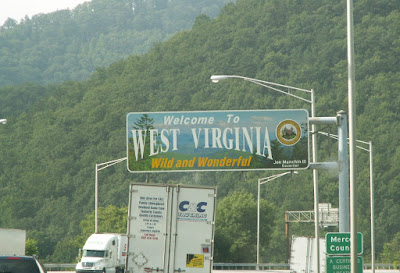 What we found in our yard was just as Wild and Wonderful. 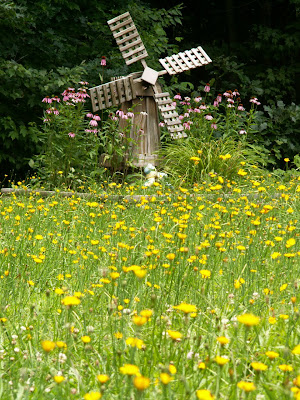 The garden wasn't in too bad of shape, though it hadn't grown much. 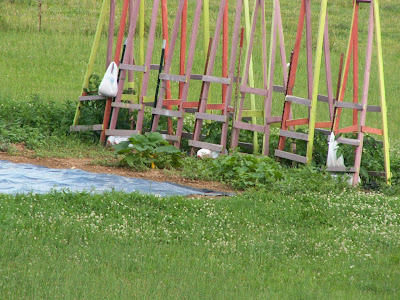 By the time the weekend was over everything was mowed and weeded and looking like we had never left. It was a great vacation for both of us. Lots of adventures and crazy stuff along the road. Our next trip is already in the planning stage. Somewhere north east by car or north west by train. Or maybe we will run across something even more fun. The only thing we know for sure is that life will take us somewhere. It always does.
Posted by Unknown at 8/28/2009 09:04:00 AM 1 comment:

I need to check my own blog every so often. I thought I had posted this already and was going to work on a new one. I found these pictures all ready to go, they just need some text. So I will set it up for you.
Some of you know that I live in the woods of West Virginia. FabHub and I have owned this piece of dirt since 1993. In all that time we have not had a Real street address. I posted previously that road signs showed up one day. Well, one day a short while ago I added a number on the house. When you order something online the shipping address needs a number to go along with that road name. So we made one up. 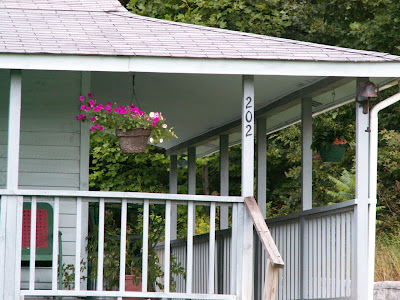 It just so happens to match our PO Box number. We tested out the address when my uncle sent me a package. It worked just fine!

We got access to a bunch of acres for the cows to graze on so that allowed us to add a couple of head to the herd. I like Red Angus, so Billy surprised me one day and said lets go to the market and see what is available. 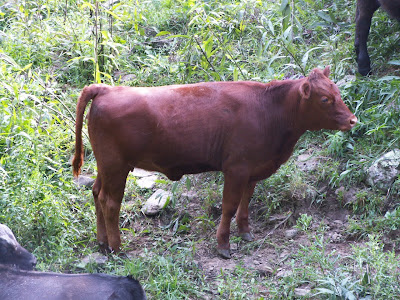 This is my new heifer, her name is Apple. I picked her out from a small group of mixed up girls that were there that day. She is beautiful - as heifers go anyway.

There was another red cow at that market. She was about 2 months pregnant and a little wild to say the least. She came into the show ring and ran all the men out. Good cow! With that attitude not too many people were willing to bid on her, Billy jumped on the chance and bought her. 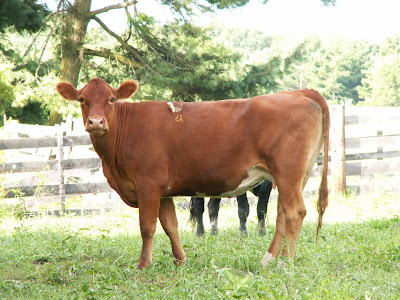 She didn't show so much white from the show ring stands. She is here now though and for very good reasons her name is Raspberry. I am not really claiming her until we see what kind of calf she has. If it is a good calf and she is a good mom, she might stay. If not, we will at least get our money back when we sell the two of them next year.

This is my other Red Angus. Her name is Cherry. She has good black babies who have helped pay for a few things around the farm. 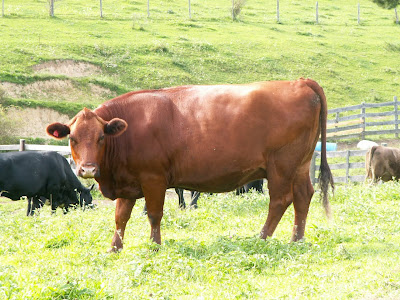 She lost her calf this year though. We don't know why for sure. Could have been a lot of things. We got a new bull that is a Gelbvieh/Angus actually called a Balancer because of the crossbreeding. Because Cherry lost her calf she is the first one who should be having one of his calves. We are looking forward to the delivery in January I think. 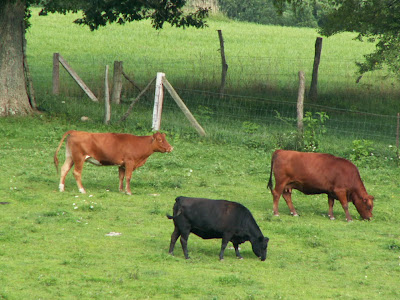 Here you see Raspberry, Cherry, and one of FabHub's cows. Raspberry doesn't quite fit in with the crowd out here. We also have no idea what type of bull she was bred to. She might have a Holstein calf for all we know. I will share when the mystery is solved.

Apple on the other hand, fits in pretty well with her new crowd. 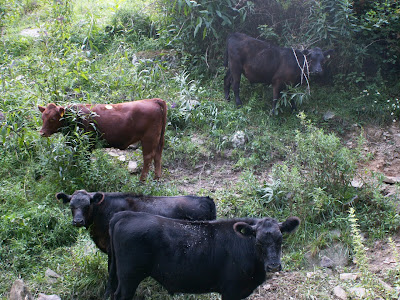 The girls are all about the same size spending their growing days away from the bull for a while yet.

Enough cows.
One day I went walking on that new piece of property to see what was out there and evaluate it for my fall runs. It is a lot flatter than most of my other trails so it might get some use if it ever stops raining.
I found something odd on that trip. An electric tree. 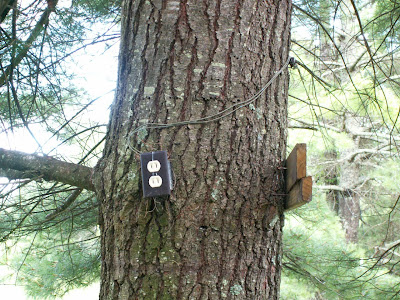 Looks to me like the squirrels in this part of the country really know how to live! The wires seem to string over the hill to the land owners house. Maybe he gets an itch to get away sometimes. Si he pitches a tent on the hill and plugs in the TV, there is a TV cable strung up too. I don't know, but it is kinds of a funny thing to find in the woods.
That is all for now. Next up - baking and canning adventures. My life is so - farmmy sometimes.
Posted by Unknown at 8/18/2009 08:49:00 PM No comments: