Well, it is has finally warmed up again, for a couple of days anyway. Billy and his brother are working on the final bits of siding for Grandma's building, I am going out to clean up the garden when I get done here, and then I might do some more painting.

I started on the gourds last night. I think they turned out all right, Billy asked who came in and painted them while he was dozing in his recliner. Glad I am not aiming for perfection, LOL. Here are a couple of pictures of what I did, the sun is out so I took them outside. I might add a bee or butterfly in a bare spot. 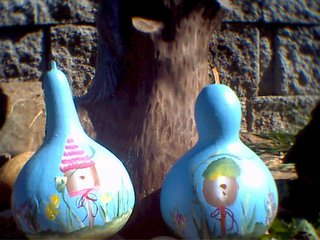 I got 5 gourds from Mom: these two painted blue, one painted green, and two that are still natural. I have a couple dozen more gourds that I grew a few years ago out in Billy's building so I have lots of supplies. These that I am working on still need to be sprayed with a sealant, have hangers installed, and drains and entrance holes drilled for the birds.

Some people might recognize the pictures that I painted as from a Donna Dewberry book, I found a Plaid craft outlet store in Georgia and picked up some ideas and supplies from there. I watched a DVD of her painting and know that what I am doing is not perfect, but that is why I define my brand of Folk Art as "art done with not a lot of talent". I am still planning on using stain and engraving or cutting to make some designs, but I bought all this paint stuff and even cleaned up an old tool box and painted it to have a place to keep all of my supplies, so I figured I would start with the paint. Well, I better get outside before this nice weather disappears again, have a great day and keep smiling!
Posted by Unknown at 10/30/2005 12:09:00 PM 1 comment: Links to this post

Well, vacation is over. I have been traveling and loafing around for the last couple of weeks. Mom and I joined Kim and Kathy and a bunch of other ladies in Arkansas at a multi-location craft fair. We had a great time. We saw a lot of crafts and got lots of ideas, most of us didn't buy much though. I saw a lot of gourds decorated in just about every possible way, but I also noticed that I didn't see to many people carrying them around. Mom said the prices were pretty high, $50 for some of them. I suspect they didn't sell to well. My thought is that the crafters looked at those gourds and said "I can do that for less". Of course they won't, but they also won't buy any either. I got a welded trellis for my Trumpet vine and a couple of light switch covers, one with an eagle on it for the living room and one with a comical frog on it for the kitchen, and some packaged food mixes. Oh, and Mom's Christmas present, but she might read this so I better leave that one out of this story.

I have a few pictures to get developed yet, yes, developed. I am hoping to find a good price on a decent digital camera after Thanksgiving. Until that I still have this cheapo to use and some pictures to share of stuff that Bill has been working on. He has built a couple of trailers in the last year or so. This first one started life as a pop-up camper. We stripped it down to the frame in the first picture and extended it just enough to be 8 feet long to its finished size in the second picture. There is enough room for his four wheeler between those fenders, barely. It looks pretty good, tows well too. We have taken it to Mom's a couple of times with no problems at all. It is a little different now, he added 2x6 rails and some tall orange markers so he can see it in the truck mirrors. 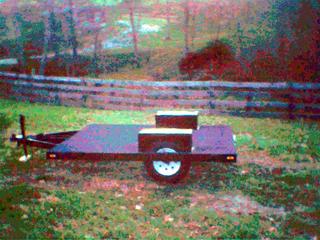 This is Bill's latest project, that is him and Jake on the four wheeler. This one also started out as a pop-up camper, but was a lot lighter weight, we actually thought it was a boat trailer it was so different from the first one. I mean, compared to that picture above of the stripped frame, this one was narrower and had only a rectangle frame with a couple of cross pieces. Anyway, Billy added some extra bed supports and an extruded metal bed so that he and his brother can use it with the four wheeler to take hay out to the cows. That should work a lot better than driving the truck out there when it is wet, or making several trips with the four wheeler. 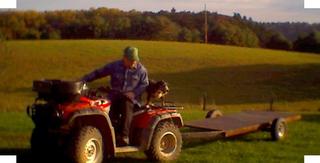 I will have some other project pictures soon. Mom and I got started on my idea for kid size Tipis, it has been challenging, but looks promising. I also discovered One Stroke painting during the trip and picked up some supplies to get me started on that. But I suppose I better just focus on getting to work on time in the morning. At least my schedule is only 4 days this week!
Posted by Unknown at 10/23/2005 09:53:00 PM No comments: Links to this post

Do Not look at the image below until you are ready to time yourself.
Ready? Now... Find the Man in the Beans. 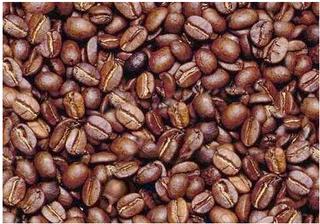 The man is really there.

Doctors have concluded that if you find the man in 3 seconds that the right half of your brain is better developed than most people.

If you find the man between three seconds and one minute, then the right half of your brain is developed normally.

If you find the man between one minute and three minutes, then the right half of your brain is functioning slowly and you need to eat more protein.

If you have not found the man after three minutes the right half of your brain needs exercises like this to make it stronger.
The man is really there. I thought this was pretty cool. Okay, I didn't make it, but I did use SnagIt to get the picture.
Posted by Unknown at 10/03/2005 08:29:00 AM 1 comment: Links to this post