My netbook doesn't have Java to load pictures on FB, so I will create a Blog to show off my new nephew and some other Christmas adventures. Probably better anyway since I usually like to blabber on.
This is Garrett, he is four months old, loves to be hugged on by everybody, and though he is being raised an OSU Cowboy, he tolerates all sports affiliations. 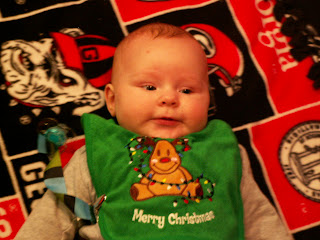 We were going to bring him some WVU products, but thought his parents might not be so tolerant.
This is FabHub NOT napping in the middle of the afternoon. 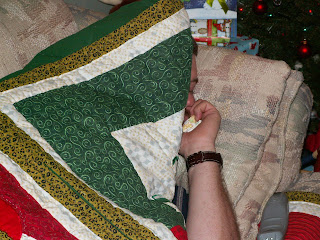 He Claims to have been watching TV, but that eye looks closed to me.
This is a project that I started better than two years ago. There is a blog post from 2007 that talks about my progress toward finishing it. I told my sister to give me six months warning if we were going to need it since I probably would need that much time to finish needle work. 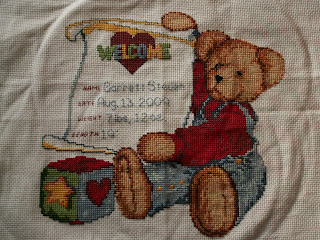 I finished it last night at about midnight while we waited for Garrett and family to arrive at Mom's. HEY, it is done! Sort of anyway. It still needs to be washed, ironed, and attached as the cover to the scrapbook that will hold many, many pictures of the newest, cutest - my nephew Garrett.
Posted by Unknown at 12/23/2009 04:47:00 PM No comments: Links to this post

No matter what the calendar says Winter has arrived.
A few weeks ago we thought this was a lot of snow. 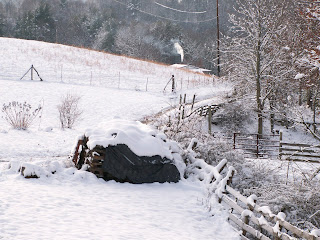 Turns out we were wrong.
This is a lot of snow. 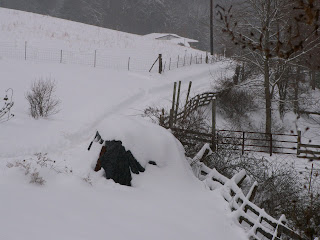 These dogs were staying warm in what seemed like cold, snowy weather. 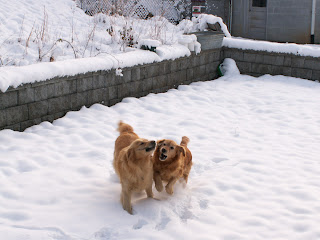 Turns out they were in pretty good shape.
This is a dog wishing she were warm. The frog has a nice hat on and the house is wearing a pretty thick blanket too. 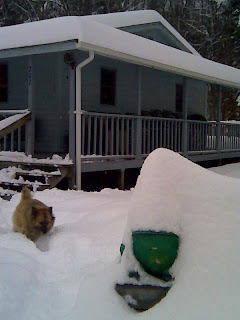 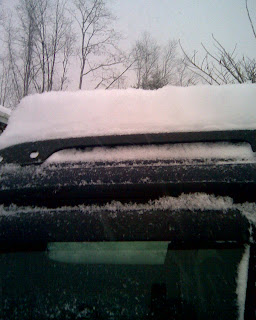 I cleaned another inch off at about 530pm. And then another right before 6pm. I was trying to keep up with it because my office holiday party was being held that night and as soon as my sister-in-law got home from work I was heading home and then to the party. It took her about 2 1/2 hours to make her 45 minute trip.
And yes we did go to the party. It took us about an hour to make the 15 minute trip to Pipestem. It was snowing, cars were in the ditch, the forecast was for the storm to keep getting worse. We went anyway. We already had a reservation to stay the night. Dinner and an open bar were part of the draw, but there was also a retirement to consider, and that was really why we went.
We did take one precaution. The farm truck was our chariot for the night. 4-wheel drive, chains at the ready, and not a a lot of drama if it earned more "character marks" in the process of getting there. 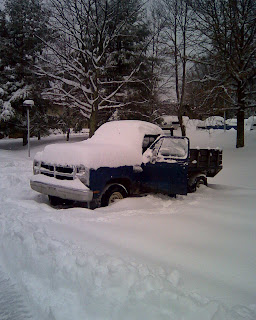 This is what we found in the morning. The truck was pretty well buried. A lot of snow fell over night. There weren't too many other people moving yet by the time we got ready to go. 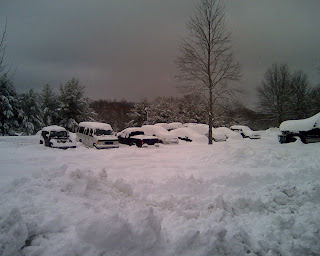 One of those cars belongs to a guy that I work with. We gave him a ride to a friends near Princeton and then headed back home. 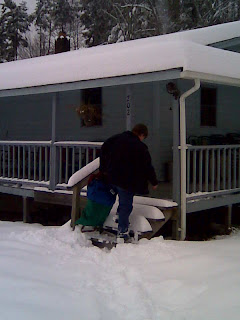 Now it is Sunday night. School is closed tomorrow. Main roads are probably clear enough for me to get to work. Darn. 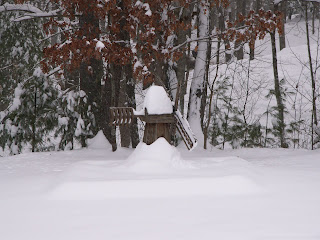