Here it is! I know I have promised to share it for a while now, but we have been busy this summer!
Now that things have slowed down a bit I have a minute to put this blog together. 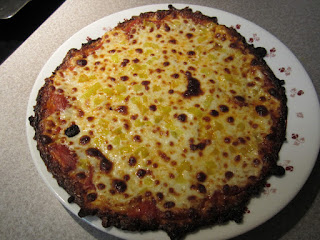 This is our favorite pizza crust. Not just because the others use processed flours as a crust, this crust is really very good. Being low carb and healthier is just a nice benefit and you can pick up slices!

The ingredients that I use for one dinner plate/personal sized pizza:
Approximately 5 ounces of cauliflower.
1 egg
1/4 cup of Parmesan cheese
1/4 cup of mozzarella cheese
Italian seasoning and extra garlic powder

I use a pizza stone to bake the crust at 425 degrees, for about 15 minutes, or until the cheese starts to brown. I think the stone helps make sure any additional moisture is removed.

If using a pizza stone, make sure you preheat the oven so that the stone is definitely hot.

Then I add the toppings of choice and put under the broiler until the toppings are heated, typically, more browned cheese. 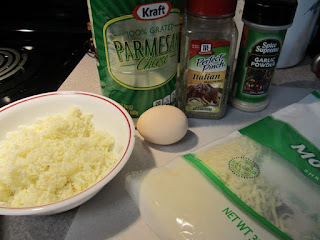 I say approximately 5 oz. because I typically use frozen cauliflower rice products. They are sold in 10 or 12 oz. packages. I microwave them as the instructions say (usually 5 minutes) and then scoop out half of the "rice" for one pizza.

If I am using whole cauliflower, I rice a head in the processor and then will weight out the amount I want to use for each pizza. Then I microwave it for 5 minutes and use it just like the frozen kind. I use the remainder of the riced head as "fried rice" in a day or two.

Two problems with that plan:
1) Most dish towels are not the right thing to use.
I have the right towel for this, thin, light weight cotton.
I used the twisting process one time. I tore a hole in my towel.

2) The water coming out of that towel is hot!
Unless you let the cauliflower cool, but that takes patience.

My solution:
A potato ricer! 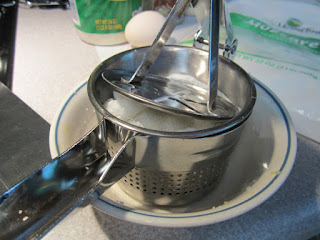 Living on a farm of people who grow a lot of potatoes and in a home that used to actually eat them, I own a potato ricer. In case you didn't know, and still eat potatoes, a potato ricer is used to get the lumps out and make really creamy potatoes.

Now I use it to make pizza crust. 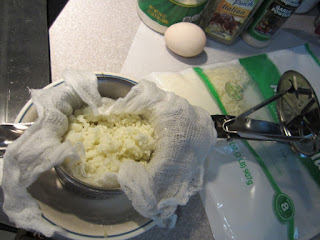 See that solid looking disc in the bowl below? That is what comes out of the cheese cloth. Excess moisture is no longer a problem. 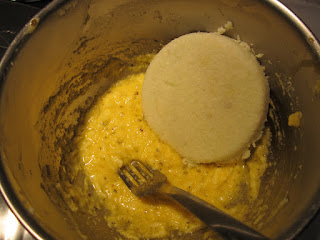 Then I add it to the other ingredients that I mixed up beforehand to make sure the cheeses are coated with egg. 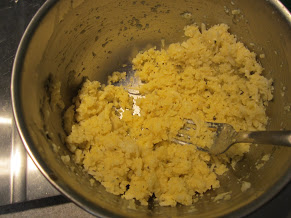 I get everything all mixed up and then dump it out onto some parchment paper. 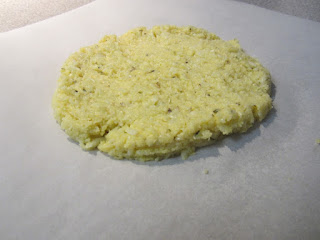 I flatten it out some to shape it and get the thickness pretty even. I have tried just pressing it out all the way at this point, but it doesn't work very well since it was sort of hard to keep the thickness even. So, instead, I use another piece of parchment paper on top of the mixture and am able to get it spread out thin and about the size of a dinner plate. If any adjustments to thickness need to be made it is easy to move the mix under the paper. 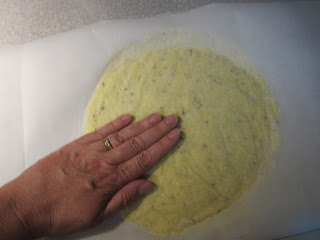 After it is spread out, pull off the top piece of parchment paper and trim off any extra parchment paper from around the edges of the crust. In an earlier baking adventure, I didn't trim the extra paper. The edges rolled up and during the final broiling process... caught on fire when it touched the element. So, now I trim the excess paper. 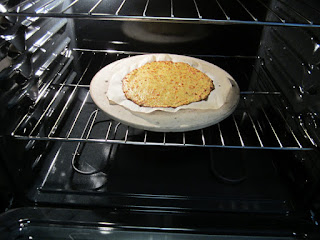 After the crust is baked I add sauce, pepperoni, banana peppers, and mozzarella.
Put it under the broiler and... PIZZA! 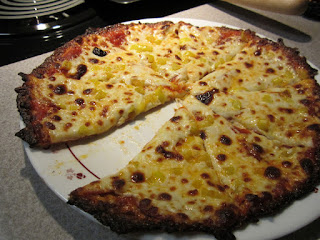